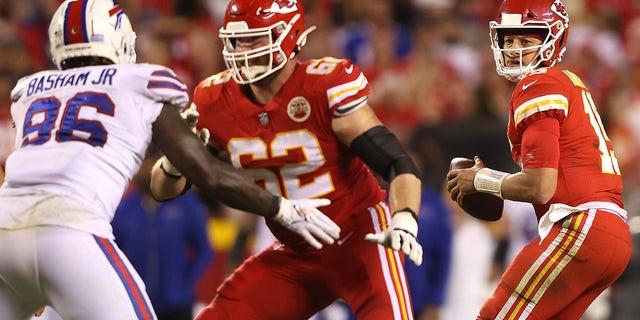 The big man, who has been a big part of the Chiefs offensive line rebuild in 2021, celebrated his birthday yesterday.

We all knew something had to happen after the Super Bowl last year. We sat on our couches, or in sports bars, or at the game in Tampa, and watched our beloved number 15 run for his life and get thrashed by the Bucs front 7 on the way to a very humbling loss. That’s putting it lightly, in all reality most of us were screaming at whatever TV we were watching, maybe drinking a little too much because of what we were seeing, and didn’t want to talk about football for the weeks to come after the game. We were pissed that Tom Brady got another one, but what really won that Super Bowl was an electric front 7 dominating a depleted offensive line. Eric Fisher and Mitchell Schwartz were watching the game from the sideline, and it became very clear to Chiefs Kingdom (and luckily Brett Veach) that offensive line depth and talent were something that was going to have to be addressed in the offseason.

On March 13th of this year, that mission was launched with the signings of Kyle Long, whom we haven’t gotten the opportunity to see yet, but just came off of the PUP list last week, and a guy named Joe Thuney from the New England Patriots. Everybody knew Kyle Long from his time in Chicago as a colorful, but dominant, offensive lineman for the Bears – as well as a member of one of the first family’s of football. His dad, Howie, is a hall of famer who played for a team we don’t talk about unless we’re beating them 41-14 last week, and his brother Chris was a defensive end for many seasons, winning Super Bowl Championships with the Patriots and Eagles before calling it a career himself. Not many people, outside of the very well-educated hallways of football academia, knew a lot about Joe Thuney. He spent the first 5 years of his career in New England, garnering 2nd team All Pro honors in 2019. It’s tough to really quantify what an offensive lineman does for a team outside of digging into a bunch of PFF metrics, which I can at times take or leave, so you often have to look at the amount of bad they allow to happen in order to determine how good they actually are. So I started to check this out, out of curiosity, when we signed him. In his time with the Patriots, and so far with the Chiefs, Joe Thuney hasn’t allowed a whole lot of bad things to happen :

It’s worth noting that of the 25 penalties he’s committed in his career, 3 have been on third down. The man doesn’t make many mistakes at all, and when he does it is typically not the back breaking, drive killing type. Only 8 career penalties in December and January, for a guy who has played deep into the playoffs essentially every year of his career outside of 2020. When I went to the season opener this year against Cleveland, I made a note to watch Joe Thuney. As a former offensive lineman myself, I have certain keys that I’ll look for when watching offensive linemen play. The thing that struck me the most, and above anything else, was his balance. He never overextends his shoulders over his hips to the extent where he can be manipulated by the pass rush, he does not “over step” – meaning his steps are short and deliberate to the point of attack – on run blocking or pass blocking, and in pass sets he has a short but powerful set back and is able to keep everything in front of him almost perfectly. He trusts his strength and does not reach. Some people argue that guards are generally protected as there is so much going on inside during a passing play that they can just kind of “pass off” blocks and keep themselves good. This is true sometimes, the same way a left tackle can pass a defensive end inside to that same guard then the end crashes down inside and a blitzer off the edge vacates. Situation conveniences occur at every level and in every position in football, but I can promise you that a left guard in the NFL is not experiencing a walk in the park when they kick back to protect a quarterback like Patrick Mahomes. Consistency is a recurring them with Joe Thuney, and we’re reaping the rewards of that in the Kingdom this year. The man defines grit (he’s playing with a broken hand that he hasn’t missed a snap for yet – and he broke it against Buffalo 5 weeks ago) and has helped usher in a completely new attitude up front for the Chiefs offensively.

A lot has been made this season about Creed Humphrey and Trey Smith’s progression as rookies, and rightfully so. They are both studs, and in combination with Joe Thuney they are the best interior offensive line in football by about a mile. This trio reminds me a lot of the Waters-Wiegmann-Shields battery we were touting in the early 2000’s. Very fitting that recently a number 31 has been running it up behind those guys. Running the ball is not just a game plan, it’s a lifestyle. And it’s in the DNA of Chiefs Kingdom. We’re able to do that for a lot of reasons this year, but Joe Thuney is a big big part of it. Happy birthday, 62.