Game of the Year Volume 4 : 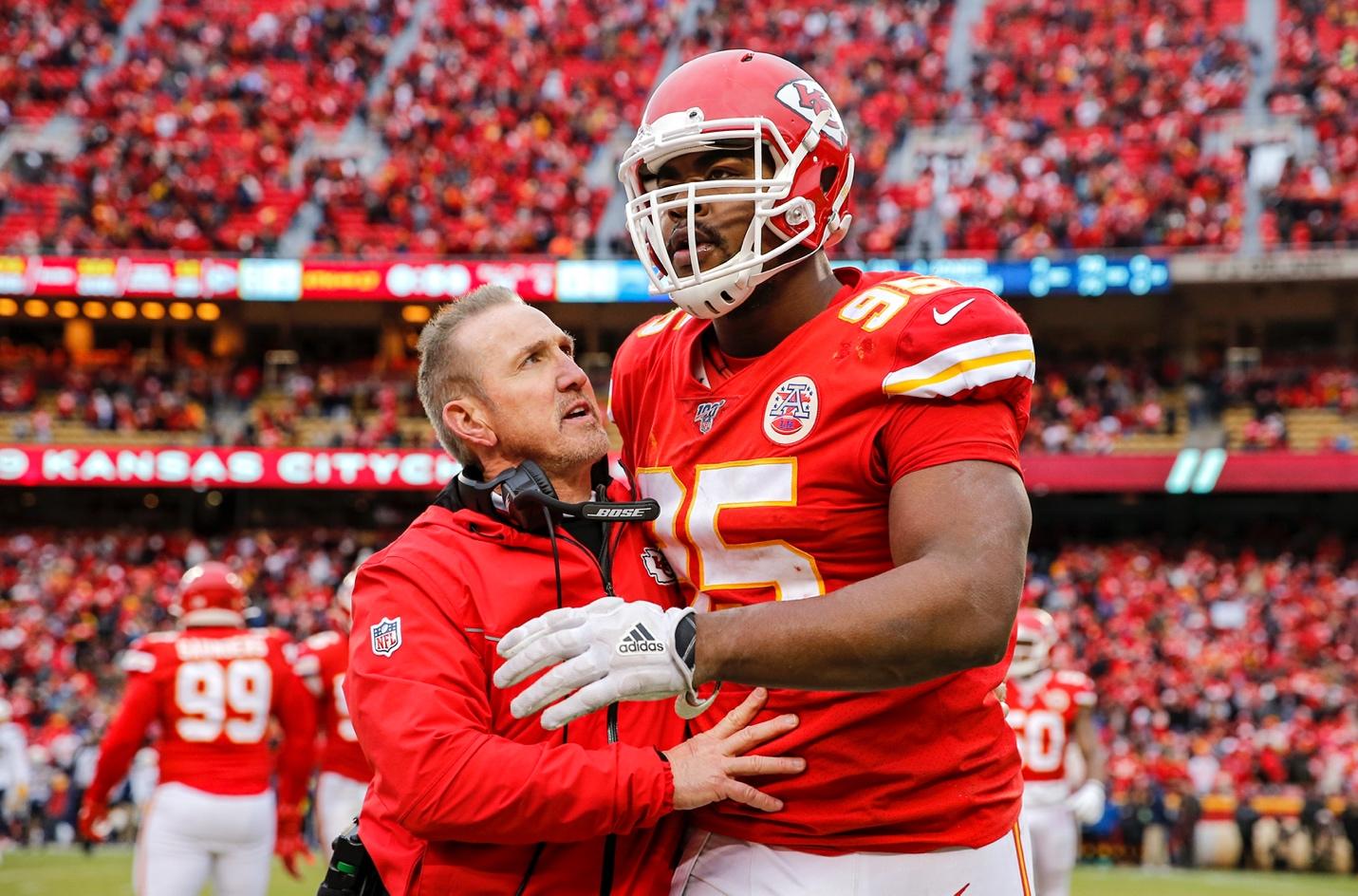 The day has finally come. For weeks we’ve been classifying every game as the biggest game the Chiefs have played all season. For good reason – when expectations are essentially go to your third straight Super Bowl or the season is a failure and your start out 1-2, then 2-3, then 3-4, tensions start to get a little high and headlines and narratives get a little out of control. In “Most Important Game of the Year” Volume 1, 2, and 3 so far (Giants, Packers, Raiders) – the Chiefs have delivered. While it’s been in different ways each week, they have still gotten the job done and we’re sitting here talking about this game today against Dallas at 6-4 and in first place in a way more competitive than anticipated AFC West. With where we’ve been and where we’ve come, this does feel a little heavier and more worthy of the “Biggest Game of the Year” tag than the previous 3, but we can’t be practicing revisionist history here at Chiefs Focus. So, let’s jump in to the outlook and prediction for the Kansas City Chiefs Game of the Year Volume 4 for the Preston Road Trophy vs. the Cowboys.

I am very glad that we come in to Volume 4 of the most important game of the year immediately following what went down in Volume 3. Had we been coming off of Volume 1 or 2, I would be a little nervous, but going to Vegas, breaking out of our offensive funk, and continuing to see progress on the defensive side of the ball was by far the most encouraging turn of 2021 thus far. Now the key is going to be maintaining that momentum. The Chiefs are actually in a pretty good spot health wise right now with the bye right around the corner, and this week welcome the Fresh Prince back into a backfield rotation that could potentially go from dangerous to lethal with his presence added. Travis Kelce has his shimmy and his swagger back (ohhhhhh) and Tyreek is still the most indefensible offensive player in the entire NFL. Make Mr. Mahomes life pretty easy, especially considering how well the front 5 have been playing. We know pretty much everything there is to know about the Chiefs, but what do we know about the Cowboys?

Also basically everything because they’re all the national media really talks about. Dak Prescott is a MVP candidate, the Cowboys offensive line and combination of thunder and lightning Tony Pollard and Ezekiel Elliott provide one of the league’s most feared rushing attacks, and the likes of Ceedee Lamb, normally Amari Cooper, who is out today with COVID, and the addition of Michael Gallup back into the lineup combined with their two excellent pass catching tight ends make the Cowboys the highest scoring and highest gaining offense in football. They’re not shabby on the other side of the ball either. Dan Quinn has done a remarkable job turning this Cowboy defense from the worst in the NFL last season to a top 10 unit this year. Led by the apparently magnet-handed corner Trevon Diggs and rookie LB Micah Parsons, the Cowboys defensive unit is 5th this season in the NFL in takeaways with 17 going up a Chiefs offense that is 2nd in the league in turnovers at 20 (only 3 of those coming in the last 3 weeks).

So we have an idea of what each team has done so far against the schedules they’ve been dealt, but how do they match up with one another? Well, top to bottom these might be the two most talented rosters in the NFL. The Cowboys are certainly loaded, and there’s a certain sense from the top down in Dallas that this year might be the window for them to win a Super Bowl with this nucleus if it’s going to happen. And we know what the expectation is for the Chiefs – revenge for the loss in Super Bowl 55 is the only outcome that could be considered successful this season.

Defensively Dan Quinn has appeared to be able to pull all of the right levers this year with the Dallas Cowboys. They have come out, since the first game against Tampa, and appeared much improved from the group last year. They have playmakers all over the field that could make life tough for Patrick Mahomes and the Chiefs today, but one thing has to be taken into consideration. The Cowboys play predominantly Cover 1 and Cover 3 in base defensive sets, which means they are used to playing most of their defensive snaps in a 1 high safety look. In fact, Damontae Kazee is really the only player they have in their secondary who is a natural deep playing safety. The rest of their safeties, rightfully constructed roster-wise for a 1 high predominant team, are more in the box safeties. Meaning they’re used like Daniel Sorensen should be used – closer to the line of scrimmage to help in the run game, threaten blitz, and cover shorter/flat routes and back out of the backfield. So do the Cowboys change up their plan just to go to a 2 high safety look that has given the Chiefs issues this year? If they try to, they may have more problems on their hands. Their safeties are not built or proficient at covering guys like Tyreek Hill and Travis Kelce in cover 2 or 2 man principle defenses. Not a bad thing, but it’s something they’re going to have to scheme around. I’m going to be looking for Dallas to stay in those 1 high safety looks and actually bring pressure with the blitz on Mahomes, something not many teams have done this year. Mahomes has traditionally been outstanding against the blitz in his career, picking teams apart, but Dan Quinn might hedge his bet on staying in his own set by betting that Mahomes not seeing the blitz recently has given him a little pause on how to be as surgical against it.

The Chiefs have the perfect counter to slow this blitz down, and it’s a running game that is getting its RB1 injected back into the mix. The way this offensive line has been playing all season really, but especially since the Tennessee game, is remarkable. They are doing what they want to people in the run game, whenever they want to, and they are creating exceptional pockets for Mahomes to throw from in the passing game. Same recipe as last week – run the ball, take what the defense gives us underneath, and let them play the 1 safety look. Eventually we will get something deep, and as long as we don’t give the opportunistic Cowboys D a chance to take the ball back, we should be in position to put points on the board all afternoon long.

Defensively for the Chiefs, it’s going to be imperative that they continue to drive home the priciples that have gotten them to where they’re at today. Stuff running gaps, rush the passer with 4, and play very, very well on third down. They’re top 5 in the NFL in defensive EPA in the last 3 weeks on third down, and they really haven’t made any improvement on first and second down. Dak is one of those quarterbacks who does a ton of his damage once the play has already been called – adjustments at the line, getting presnap reads on the defense, etc. It just so happens that Spags is one of the most notorious blitz/coverage confusion defensive coordinators in recent history in the NFL. If Chris Jones, Frank Clark and company can get home as couple times and keep Dak uncomfortable, the scheme should be able to bait the Cowboys into a couple mistakes. Gap assignment is going to be penultimate for this group today – if we get Dee Ford syndrome and just pin our ears back and don’t watch rushing/screen lanes we could be in for a long afternoon. But with Amari being out and Tyrann and crew just have to keep track of Ceedee at 1 and the rest of that bunch, I think the Chiefs defense can stymy the Cowboys offense just enough to get this thing done.

People are looking for this to be a back and forth, down to the wire touchdown fest much like the Chiefs/Rams Monday night football meeting from 2018. I don’t see that happening. I think the Chiefs will get plenty of opportunities, and if they can convert will put up a good amount of points on this Cowboys team, but I don’t know if the Cowboys offense knows exactly what’s about to hit them from a variety standpoint with KC’s defense. I know what I just said, and I promise I haven’t started drinking yet – the defense will win this game for the Chiefs today. Trevon Diggs’ son’s favorite quarterback will come out on top in this one.