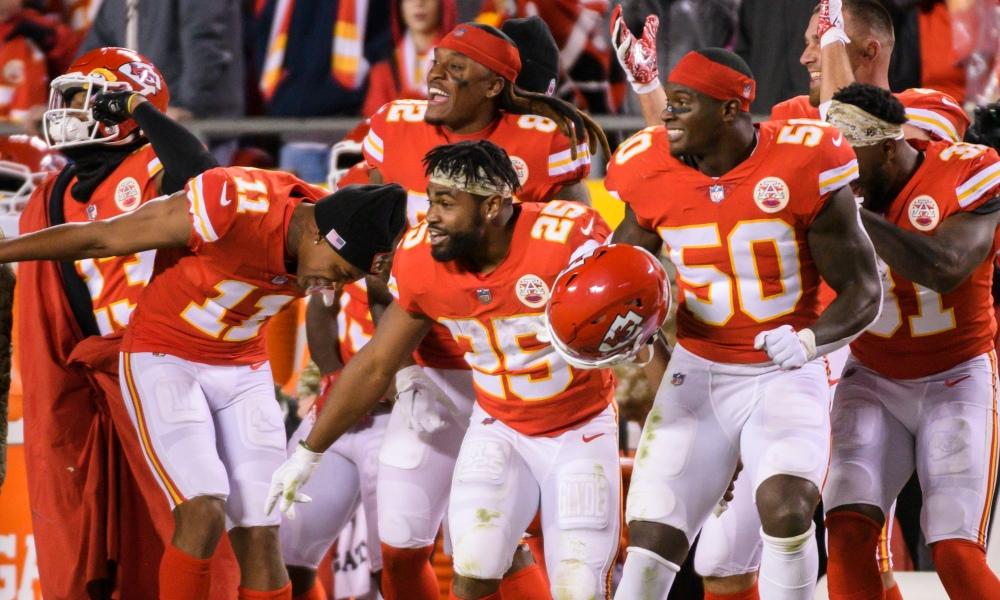 It’s long been speculated that you cannot, in fact, teach an old dog news tricks. I believed this adage for years, until 2018. I have a 13 year old bassett hound named Frank who, for all intents and purposes, is not much of a trick guy. Classic blue-collar hound who just likes to eat and likes his belly rubbed and butt scratched. So when my roommate at the time got an Australian shepherd puppy, I assumed that the tricks he was going to teach this puppy would in no way translate or be replicated in Frank. Frank was almost 10 years old and set in his ways. But a funny thing happened. As Harry (the Australian shepherd) learned to sit, lay down, and shake, so did Frank. The old dog was learning new tricks right before my eyes, and it completely flipped my opinion of the timeless saying.

4 weeks ago we were staring down home games against the Giants, Packers, a trip to Vegas for the Raiders, and back home against the Cowboys after an absolutely miserable loss to Tennessee. Many thought the team was broken and if we could get to the bye 6-5 or 5-6 we could maybe fight for one of the AFC wild card spots. Some thought the playoffs were a pipedream at that point. Some saw a roster of guys who had been there before, who had fought and clawed through adversity on and off the field together for the past 3 seasons that just looked a little lost at times through the first 7 weeks of the season. One thing was certain – the old dogs calling the shots on the sideline and in the box needed to make some adjustments no matter what outcome was to come of the 2021 season. They needed to learn some new tricks. Steve Spagnuolo abandoned his most prized possession, his depth chart, and started making adjustments. Out with Daniel Sorensen, in with Juan Thornhill. Improvement. Willie Gay got healthy, so Ben Niemann was mostly a thing of the past. More improvement. Nick Bolton began to emerge as a premier rookie middle linebacker right as Anthony Hitchens injured his tricep. Again, more improvement. And as the trade deadline approached, Brett Veach pulled the string and brought in Melvin Ingram, allowing Spags to move Chris Jones back inside and crafted a pass rush that has been downright nasty in the last 3 weeks. Steve Spagnuolo in 2021 is somewhat like Frank the Hound in 2018 – the old dog let go of what he was used to and what he knew, and learned some new tricks. And they are paying off massively for the Chiefs going into their bye week 7-4, on top of the AFC West, and only a game back of the AFC’s top seed (and the potential of the AFC playoffs coming through Arrowhead Stadium for the 4th straight season) with a much weaker schedule in the back half of the year.

Let’s start by congratulating the Kansas City Chiefs on their first division championship of 2021 as they finish their NFC East slate 4-0. No doubt an interesting path getting there, but being crowned NFC East champs is a great honor no matter how you got there. If you took the time to read the Chiefs/Cowboys preview yesterday, you’ll recall the final paragraph before I made a joke about Travon Diggs son loving Pat Mahomes more than Dak and gave the score prediction :

People are looking for this to be a back and forth, down to the wire touchdown fest much like the Chiefs/Rams Monday night football meeting from 2018. I don’t see that happening. I think the Chiefs will get plenty of opportunities, and if they can convert will put up a good amount of points on this Cowboys team, but I don’t know if the Cowboys offense knows exactly what’s about to hit them from a variety standpoint with KC’s defense. I know what I just said, and I promise I haven’t started drinking yet – the defense will win this game for the Chiefs today.

I’m not saying I’m a genius, but that was pretty damn sharp. Finally. Ignore the fact that I was off on the point total by 29 points. The way the defense came to play against the Cowboys was nothing short of a polarity to the team we saw take the field in weeks 1-7. They were getting after the passer. The secondary was covering Dallas’ receivers relentlessly, not allowing even an inch of breathing room. The defensive front 7 were aggressive and swarm tackling, limiting the Cowboys vaunted rushing attack to 82 total yards (padded massively by one 31 yard run by Tony Pollard) while knocking Zeke Elliott out of the game temporarily. Dak Prescott was uncomfortable from the first drive on, and the only player he managed to find in the endzone was Charvarious Ward on an interception to end the first half.

It’d be hard to overstate the importance of the Chiefs adding Melvin Ingram to the defense at the trade deadline. Since number 24 has joined the roster, the Chiefs have pressured the quarterback 48 times (16/game) compared to 65 total pressures in weeks 1-7 (9/game) and collected 8 sacks, which equals their total from the first 7 games of the season. The Chiefs pressured Dak Prescott on 56% of his drop backs last night. You can look at Ingram’s numbers and be unimpressed by them alone, sure, but what he has allowed Spags to do schematically (moving Chris Jones back inside and playing him on the same side as Frank Clark), as well as the two aforementioned franchise defenders getting healthier and healthier each week has transformed the KC defense from an empty water gun to a full fledged war machine in just a few weeks time. The scary thing is this unit is only going to continue to improve as the season progresses. What was once one of the greatest liabilities in league history has become an incredible strength that has undoubtedly carried us to a couple wins in the last 4 weeks.

The defensive love does not stop with the defensive line. Willie Gay Jr. brings so much to the table for this team. He is the heartbeat of the defense from an energy standpoint. He is a true sideline to sideline defender in the middle of the field – flying around and smacking people in the run game, with the speed and athleticism to make an impact in the short to intermediate passing game as well. He’s tied for the team lead in interceptions at 2, and has been another incredibly welcome addition to the defensive unit since his return from injury. And Lajarius Sneed. What can I say about this guy? Not only is this man a true, lockdown number 1 NFL cornerback, he might be the best tackler on the roster. At very least it’s between him and Nick Bolton (unironically they are our two leading tacklers), but Sneed in the open field almost looks like he has some sort of X-Men Magneto-esque superpowers. It’s remarkable even talking about this now when all of the talk at the beginning of the year was how bad the Chiefs were at tackling – 36 missed tackles in the first 7 weeks, most in the NFL. At one point in the season the Chiefs were giving up over 7 yards per play to opponents – to put that number into context, they were allowing more yards per play than the Rams Greatest Show on Turf gained when they were at their peak. Anyone the Chiefs played was instantly the greatest offense that had ever touched the field. Now, look at the last 3 games and the Chiefs are giving up 5 yards per play (12th in the NFL currently), and yesterday against Dallas – the league’s top offense coming in to the game – they gave up 4.3 yards per play, the 5th best mark on the day yesterday. Again, against the best offense in football. This defense is alive and they are the pulse of this entire team right now.

Offensively there were good moments and bad moments yesterday. The first two real drives of the game were fantastic – Mahomes was surgical, the offensive line was moving the Cowboys front however and wherever they wanted to, and the team marched in a 9 play, 86 yard drive to open the game with a Travis Kelce direct snap TD, sandwiched in a field goal off of a short field provided by a turnover, and capped off an 8 play, 65 yard drive with a short Clyde Edwards-Helaire touchdown run (bonus taunting penalty included – what a joke). Then things got sloppy. Trey Smith played just his second bad game of the season and was a little bit of a liability for the Chiefs. Nothing that he won’t learn from and bounce back better, though. While Andrew Wylie started out playing well as the primary blocker on Micah Parsons, the law of averages won out in that battle and Parsons was able to get to Mahomes against Wylie and Orlando Brown Jr to collect his two sacks on the day. You also had a ball bounce off of Travis Kelce for a Cowboys interception, but luckily by that point we had firmly planted our defensive flag in the ground and set the tone for the physicality of the game and had momentum on our side. But, generally speaking, nothing seemed out of whack for the offensive unit yesterday outside of the offensive line getting coaxed into some mistakes with certain twists and stunts that they hadn’t seen before. With a group this young, you expect to have that from time to time – they will get in the film room and get these things corrected over the course of the next couple of weeks before facing Denver in week 13.

A couple of guys who don’t get a lot of shine anywhere in Chiefs Kingdom who played exceptional games from a hustle and effort perspective – Daurice Fountain and Demarcus Robinson. Fountain stepped in when Marcus Kemp went down and embodied the “next man up” mentality. He was a fringe roster guy after training camp, has stuck on the practice squad due to his work ethic and willingness to do whatever he has to do to help the team, and stepped in for Kemp (an all-world special teamer) and didn’t miss a beat yesterday. D-Rob has been around for a lot longer, but he just continues to do the things that other people might not want to do. He blocks his ass off in the running game, he blocks down field when his teammates catch the ball – his effort level is tremendous. It’s the NFL – production is king. But these guys are two examples of why football is the ultimate team sport. You don’t get your name in the paper for everything you do, but it doesn’t matter. You do it anyway.

My overall feeling from this game, as I was watching it, was that this felt more like a proposition from the Chiefs to the Cowboys than an actual contest. Like they set up a bunch of milk bottles, glued them together, and gave the Cowboys a baseball and told them if they could knock them down they’d win a prize, in this case the prestigious Preston Road Trophy created by billionaires for billionaires. It seemed about as fair as a carnival game. I had been missing that feeling with Chiefs games up until the last few weeks. Right now it feels like this team is back in a very big way, is very dangerous, and hasn’t hit their ceiling yet. The Chiefs put the rest of the NFL on notice going into their bye – they’re not going anywhere, and the revenge tour is most definitely still on.