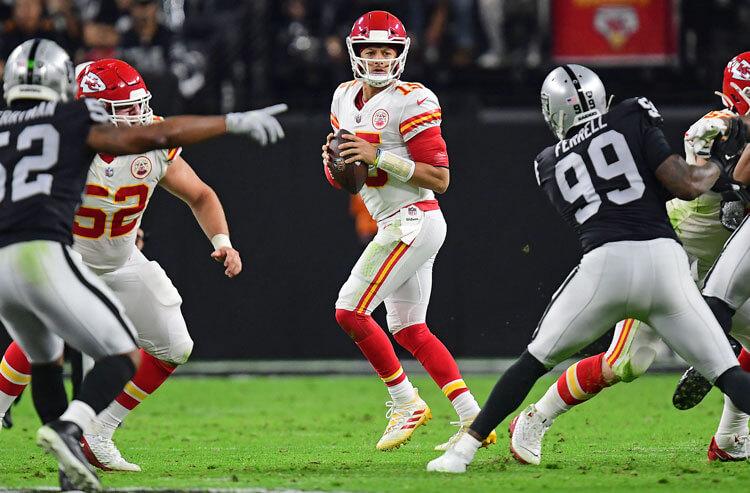 The Chiefs and Raiders find themselves on two divergent paths that will cross Sunday in Kansas City.

The Raiders and Chiefs enter Sunday’s contest on two completely polar trajectories. The Chiefs, winners of 5 in a row and sitting at 9-4 atop the AFC West, are throttling towards another (hopefully) deep run in the AFC playoffs, which the Raiders – 6-6 and losers of 4 of their last 5 games – appear mostly lost heading towards another offseason where they will try to figure out why they started out so well and sputtered down the stretch. Las Vegas finds themselves in this position because of a defense that has gone essentially protested stopping anyone on offense for the past 5 weeks, and an offense that has struggled after the loss of Henry Ruggs to find any kind of identity at all. Injuries along the offensive line and specifically to Darren Waller have not aided the Raiders in that regard, but nonetheless the team has been erratic and impotent on that side of the ball in recent weeks.

The Chiefs offense has not been blowing many folks away as of late, but they have been mostly protective of the football and efficient. Limiting penalties and establishing a newer identity has been crucial to allow them to win football games behind a defensive unit that has been nothing short of spectacular. We’ve said this a lot, so I won’t beat the point home too much here, but this defense ranked 30th in the NFL in DVOA after week 7, and now sits at 14th 6 weeks later with a bye week nestled in there. This movement comes on the back of holding each of the last 5 opponents under 20 points (allowing 11.2 points per game in those 5) as the second best scoring defense in that time frame as well as coming in second in yards allowed. A revived pass rush and strong secondary play has been a catalyst in the Chiefs moving, predictably, up the defensive rankings this year as is tradition with a Steve Spagnuolo led unit.

Keys for the Chiefs Offense

The last time Kansas City was having to answer the types of questions they are fielding this week as an offensive unit, a matchup with the Raiders in Vegas happened to pop up on the schedule. This was the medicine the unit needed at the time, and an antidote that had national and regional media outlets proclaiming that the Chiefs offense was fixed. The Chiefs were back. Patrick Mahomes sprung 400 yards, 5 TD, and a 70% completion percentage on the Raiders, and the Chiefs rolled into first place in the AFC West for the first time since mostly everyone was 1-0 in week 1. But the answer then is the same as the answer now – the team has never been “broken” in 2021. Sure there have been plenty of mistakes, but all correctable ones to this point. The team has been identifying exactly who the 2021 Chiefs are. The biggest part of the post-Super Bowl makeover for the Chiefs was without a doubt the offensive line. Part of that self-identification process lies in the evolution of that very unit. Couple young players with a brand new mentality up front can be difficult, but with the new cast and crew up front the team has developed a new identity offensively – a group that will hit you in the mouth early and often, drive the ball down the field, and take time off of the clock. This Chiefs offense is not the same unit as we saw in 2018, 2019, and 2020 – but it is arguably more deadly. The pieces are still there to take big chunks of yardage in single plays, but the ability to line up and control the game running the football is an added element that the team is learning how to balance, and the coaches are learning how to call.

While the running game is dynamic behind Clyde Edwards-Helaire, Darrell Williams, and that group of big mean men up front, the passing game has left some to be desired this year, and penalties have hurt the Chiefs on that side of the ball as well. Much attention has been placed on drops in the receiver corps. Rightfully so, particularly when you look at Travis Kelce and Tyreek Hill at number 2 and 3 in the league in drops. Do they have to be better? Yes. But consider this – Hill and Kelce have 232 combined targets this year. The next set of teammates on that list are the Chargers Mike Williams and Keenan Allen with 217, a whole 15 less than Hill and Kelce in the same amount of games. With the target saturation being that high for our two top targets, of course there are going to be more drops as a result. The Chiefs desperately need a viable WR2 to step up and take some pressure off of these two to make every play. Mecole Hardman and Byron Pringle have had flashes, but have been extremely inconsistent all year. The Chiefs don’t seem interested in getting the ball to Josh Gordon, even though they’ve gone through the motions of getting him on the field immediately and consistently. He’s played in 29% or more of offensive snaps since the first week the team signed him, but has never to nothing on the stat sheet to show for it.

Turnovers and penalties can kill any offense, no matter how good they are. The Chiefs need to limit “administrative” penalties like false starts and holding in order to avoid shooting themselves in the foot. Patrick Mahomes has to take care of the football, and he mostly has over the course of the last 5 weeks. One important thing to consider is that of his 12 interceptions this year, 7 of those have hit his wide receiver’s hands before they were picked off. That is a number that makes me cringe, but also gives me hope that we’re 7 mental errors away from the Chiefs being 11-2 and there being no doubt about who the best team in the NFL is. There is just a little bit more for this offense to clean up, and prove, in order to regain that reputation.

Keys for the Chiefs Defense

To put it simply – keep doing what they’re doing. It’s no secret that this unit is one of football’s best at the moment. It’s also no secret around these parts that one of the biggest reasons is the addition of Melvin Ingram. Kansas City dealing for Ingram at the trade deadline is arguably the best in-season deal in the NFL this year, and it has turned the tide immensely for the front 4. When you look at the stat sheet for Ingram, or anyone on the Chiefs defensive line really, you’re not going to see TJ Watt numbers. They are not individual stat sheet stuffers, they play as a unit and are best with a pack mentality. The addition of Ingram has not only fortified that unit from a technical perspective, with his physical edge setting allowing Chris Jones to seamlessly move back inside and Frank Clark to play his free wheeling style opposite of Ingram – it has created a new attitude up front. This unit is playing physical and confident football in the trenches up front, and that’s translating to every other level of the defense. Confidence is key and the big boys have it right now. With the Raiders being a little beat up on the offensive front, look for this to be an advantage again this week, just like it was in Vegas in week 10.

As the defensive line has surged, the secondary has come together as a lockdown unit as well. The main concern here, obviously, is the status of Rashad Fenton and LaJarius Sneed. Fenton is still nursing a knee injury and it’s unclear if Sneed will play or not following the unexpected death of his older brother on Saturday. Without these two, there are certainly opportunities for the Raiders to take advantage. But, missing Darren Waller will ultimately hurt Las Vegas more than the schematic opportunities Sneed and Fenton’s potential absences would allow them to take advantage of. One player who could sneakily take advantage of this, with eyes most likely all over Hunter Renfrow, will be Zay Jones. The Chiefs will need to keep an eye on him as he was able to make several big plays for Las Vegas in their lone recent win against the Cowboys. Even with those two potentially out, safeties Tyrann Mathieu and Juan Thorhill look just about best in class at the moment, Willie Gay provides excellent cover ability at the second level, and Charvarius Ward and Deandre Baker should be able to hold down the fort enough for the unit to continue it’s dominance against a stuggling offensive unit. One key to watch in the linebacking corps will be the playing time splits between Nick Bolton, Anthony Hitchens, and Ben Niemann. Bolton needs to be out there more, no question, and should against the Raiders, but there were some concerning trends last week with these 3 and I’m curious to see how Spags moves forward with this rotation this week.

You can sit around and breakdown every piece of this game, position by position, point to counterpoint,  but this boils down to one thing  – in a division matchup, who wants it more? The Chiefs have fire right now, the Chiefs are on top of their game from a physicality standpoint, and frankly – the Chiefs have the Raiders numbers. Derek Carr is an excellent quarterback when there is not a whole lot on the line, but when the going gets tough and the heat is turned up, he generally sinks.

Derek Carr’s NFL career can be pretty easily defined by the peaks and valleys he and his teams have experienced. He’s a player who more than once has found himself in the early season MVP conversations, just to face questions later in the year about what happened to a once promising season. He has led dynamic offensive units at times, and at times looked as though he’s taking the first snap of his life in a NFL game. There have been games where you wouldn’t assume he wears eye makeup, and others where he gets upset and his mascara begins to run. There have only been two things in Derek Carr’s career that have been truly consistent – first, his inconsistency, and second, the fact that the Kansas City Chiefs are his legal football guardian. Carr’s 3-12 record against the Chiefs represents by far the most losses he’s experienced against a single opponents in his 8 years in the league, and his 1-6 record at Arrowhead Stadium are the most losses in a single building that Carr has racked up as well.

Patrick Mahomes could not embody the opposite of that more. One team here is the class of the AFC West and the AFC in general, and the other is still trying to figure out who they are. While the Chiefs move one step closer to another AFC Championship game running through Arrowhead Stadium, the Raiders move one step closer to an offseason full of the same questions that remain unanswered after 8 years, a few head coaches, and 2 cities. The Chiefs haven’t forgotten about the victory lap around Arrowhead last year, and won’t let that happen again.