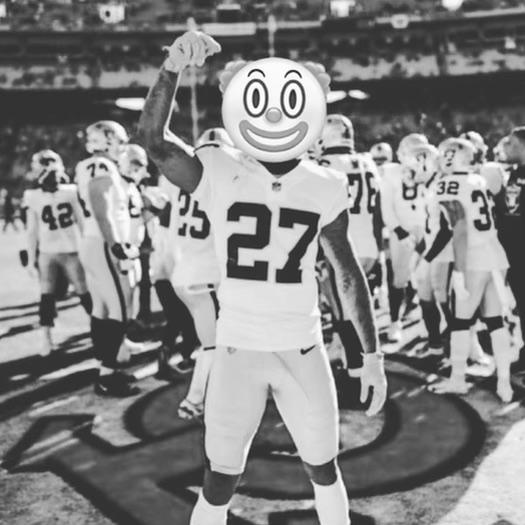 The Kansas City Chiefs absolutely clown the Las Vegs Raiders in what will go down as “The Logo Game”, the most lopsided victory in series history

Well, well, well. At the beginning of CBS telecast of the Chiefs/Raiders week 14 matchup, the notably bad announcing crew of Ian Eagle and Charles Davis pointed out that before the game Raiders defensive end Yannick Ngakoue (the same guy who took out Logan Thomas’ knee last week) gathered his teammates first at the 25 yard line, then marched to mid field to hold their pregame hype session on the Chiefs logo at midfield. I said a few choice words to my TV and that warranted an apology to my fiancé and two dogs, but wasn’t frustrated for long. But seriously, what a bush league move – especially when you’re a completely overmatched football team and you just had that proven to you on your home field less than a month ago. I didn’t like it, the crowd didn’t like it, and it appears that the Chiefs really didn’t like it. KC won the toss and deferred, and on Oaklands first play from scrimmage Jarran Reed punched the ball out of Josh Jacobs hands, Mike Hughes recovered and ran it in for a score, and the game was essentially over 17 seconds in. After all of the damage was done and the bodies were sorted out, the Chiefs walked away with a 48-9 victory over the Las Vegas Raiders, good for their 6th consecutive win on the season. The win guarantees Kansas City stays in first place in the AFC West with a 9-4 record – the Los Angeles currently sit at 7-5 with a 14-7 lead over the New York Giants at home. The Chiefs will face the Chargers on Thursday night in Los Angeles. The final score also represents the biggest blowout in the history of the rivalry with a margin of victory of 39 points. This rivalry dates back 61 years and 125 games played between the two franchises.

The tone was set early and often by the Chiefs defense. Take the first play fumble out of it, from the second drive on the Raiders saw pressure consistently and violently from the Chiefs front 7. Melvin Ingram again was making examples of grown men on national TV, and Frank Clark had his rush timed up so perfectly today that it seemed like he at times was breaking the space time continuum. The Chiefs totaled 11 QB hits today (Clark with 4, Alex Okafor and Tershawn Wharton each 2, and Mike Danna, Melvin Ingram, and Chris Jones all registering 1) to go along with 4 sacks of Derek Carr. The KC defense was opportunistic as well, forcing 5 Raider turnovers (4 fumbles to go along with Tyrann Mathieu’s interception) and all but the final fumble, after which the Chiefs lined up in victory formation and kneeled the game to sleep, resulted in touchdowns for Kansas City. Offensively all the Raiders could really hang their hat on was the performance of Hunter Renfrow, who is very good. Mike Hughes was a star in this game, forcing two fumbles and scooping and scoring on the Jacobs fumble to open the game.

Offensively, the Chiefs gave us a little bit of everything today, and it all felt way too easy. First, the Raiders showed their true colors from a penalty standpoint as they had numerous defensive penalties that kept the Chiefs offense on the field, extended drives, and gave the Chiefs free first downs. Like a self inflicted gunshot wound to the foot, this is how the Raiders day continually played out. They are one of the most undisciplined teams in football, leading the league in penalties coming into this game and racking up an additional 9 for 85 yards, including an offside by Yannick Ngakoue in the first quarter that kept a touchdown drive alive on 3rd and 8, a defensive holding that turned a 2nd & 9 from the Raiders 13 into a first and goal from the Raiders 7 for the Chiefs on another touchdown drive, and on the next a defensive offside (5 yards), defensive pass interference (30 yards, and defensive holding (5 yards) that all helped the Chiefs advance the ball and put another touchdown on the board before half, making it a 35-0 affair before the Raiders squeaked out a field goal on 3rd and 4 from the inside the Chiefs 10 to get the goose egg off of the board before halftime. Patrick Mahomes was efficient as you could have asked, going 20 for 24 for 258 yards and 2 touchdowns (a 139.2 QB Rating) as the receiving corps was as well balanced as it has been all year. 8 Chiefs recorded receptions today with Tyreek Hill leading the way at 4 catches for 75 yards. This is a great indication that was we discussed in the game preview is being addressed, and the offense isn’t going to have to live and die by Tyreek Hill and Travis Kelce. Another bright note – Mecole Hardman has several plays called for him today and answered the bell, and Josh Gordon finally got into the endzone as a member of the Chiefs.

While most everything went well today, there’s always room for improvement.  The Chiefs offensive line was a little suspect at times, but we really saw mostly mental errors. Andrew Wylie did look rough, giving up 2 of the 3 Raider sacks on the day, so the clock on Lucas Niang’s return to the lineup is ticking louder and louder by the minute in Chiefs Kingdom. Wylie has done well at times, but is definitely a rotational guy and not an every down starter at the NFL level. Additionally, the running game never truly got going today for KC. If you take away Derrick Gore’s 51 yard touchdown run, which seems like a crime to think about, the Chiefs rushed the ball 29 times for 81 yards. That’s 2.8 yards per carry. They never really needed to establish a run game to keep distance from the Raiders, Vegas did that for us by handing the ball back 5 times, but we’ll have to be much more focused on establishing the run against the Chargers, and frankly much better at executing.

As for the mental errors, though – the Chiefs were flagged for 2 illegal man down field penalties today – one on Joe Thuney, and one on Orlando Brown. There has to be a sense of locational awareness as an offensive lineman during passing plays, so a little refresher course on this is likely in this short week of practice. In their defense, blocking for Patrick Mahomes with the scheme that the Chiefs run would be tremendously difficult to gauge where the ball is, who has it, and if they’re past the line of scrimmage or not at certain points in certain plays. Notwithstanding, they have been practicing in this offense for an entire offseason and 14 weeks into a regular season, they have to be better than that. Someone on Twitter astutely pointed out that had this been a tighter game against a better team, the Kingdom would be a lot more tense about those types of penalties hurting us.

A couple of random observations from today below :

All in all, an incredibly satisfying win where the offense was methodical and efficient, the defense held another team to 9 points and dominated, and the Chiefs ran the aggregate score on the Raiders for 2021 up to 89-23. Also a very inspiring game for the Chiefs. As we all know by now, LaJarius Sneed missed today’s game after losing his brother in an act of senseless violence on Friday night. The way the team rallied and brought one home for him was nothing short of remarkable for multiple reasons. To have a teammate experience loss like that affects everyone on the team. And to have that teammate be one of the best players on your defense certainly can affect the product on the field. It did not today, as the Chiefs embraced the next man up mindset, Mike Hughes balled out, and secured the W for 38.

With the noon games now wrapped up, I am back to 7-1 on the week (7-0 during the early games today), and can watch the matinees with full enjoyment as the Chiefs are victorious yet again. This is a short week, and we will have a lot of content leading up to the Thursday night showdown with the Chargers that will likely determine who walks away with the West. Huge win, bigger one coming up. Happy victory Sunday Focus Fanatics!