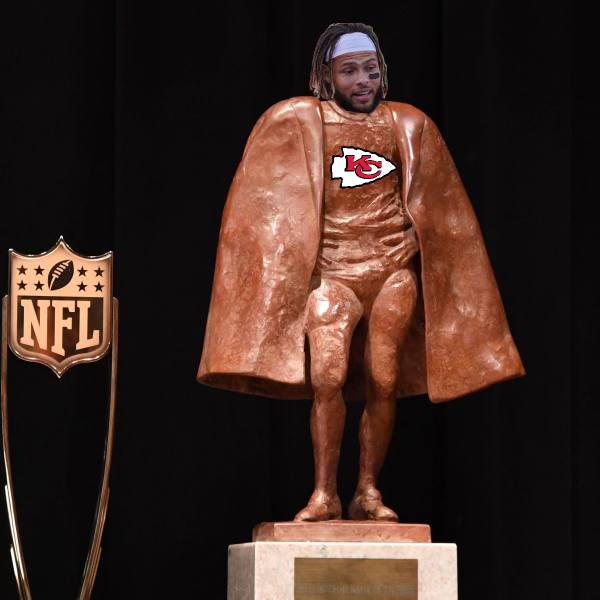 Chiefs Safety Tyrann Mathieu is in a tight race for the $25,000 donation to his charity that will come with winning the NFL’s Walter Payton Man of the Year.

Everyone has seen this all over twitter over the past few weeks – hashtags and twitter handles of NFL players in the running for the Walter Payton Man of the Year award. Kansas City Chiefs players are no stranger to this award. The Chiefs franchise shares the record for the most players to win the WPMOY with 5. The Chicago Bears also have 5. Past Chiefs winners include :

Obviously the five players mentioned above were great players – all are in the Chiefs hall of fame, and all but Brian Waters are in the NFL hall of fame. So Mathieu could be in great company not just in Chiefs history, but NFL history as a player and for his efforts to improve Kansas City and other communities that have been a part of his journey in life. For those unaware, Mathieu was nominated for his community work stemming from his charity, the Tyrann Mathieu foundation. The mission statement of his foundation, from it’s official website, says Mathieu established his foundation to impact the lives of financially disadvantaged children and youth through encouragement, opportunities and resources to achieve their dreams in Kansas City and his hometown of New Orleans. The programs include the Tyrann Mathieu Techzone – state of the art Honey Badger themed tech academic centers geared to provide financially disadvantaged kids resources they need, Tyrann’s Backpack Giveaway, Heart of a Badger Youth Camps where Mathieu partners with Hard Count Athletics to provide children in New Orleans a safe, productive, and uplifting environment to develop their football skills, and probably the most regonizable program – Tyrann’s Turkeys. In partnering with the Giving Hope KC Food Pantry, Mathieu has provided Thanksgiving turkeys to over 500 area families in each of his years in Kansas City.

It’s always fun to watch number 32 fly around the field every Sunday and make plays for the Chiefs, but it’s incredible to sit back and consider the impact that Mathieu has on not just the Kansas City community, but also his hometown of New Orleans. They don’t make many like Tyrann Mathieu. Make sure to support out own and continue to vote for him for Walter Payton Man of the Year. You can do so by tweeting and retweeting the hashtag #WPMOYChallenge and Mathieu’s twitter handle @Mathieu_Era.