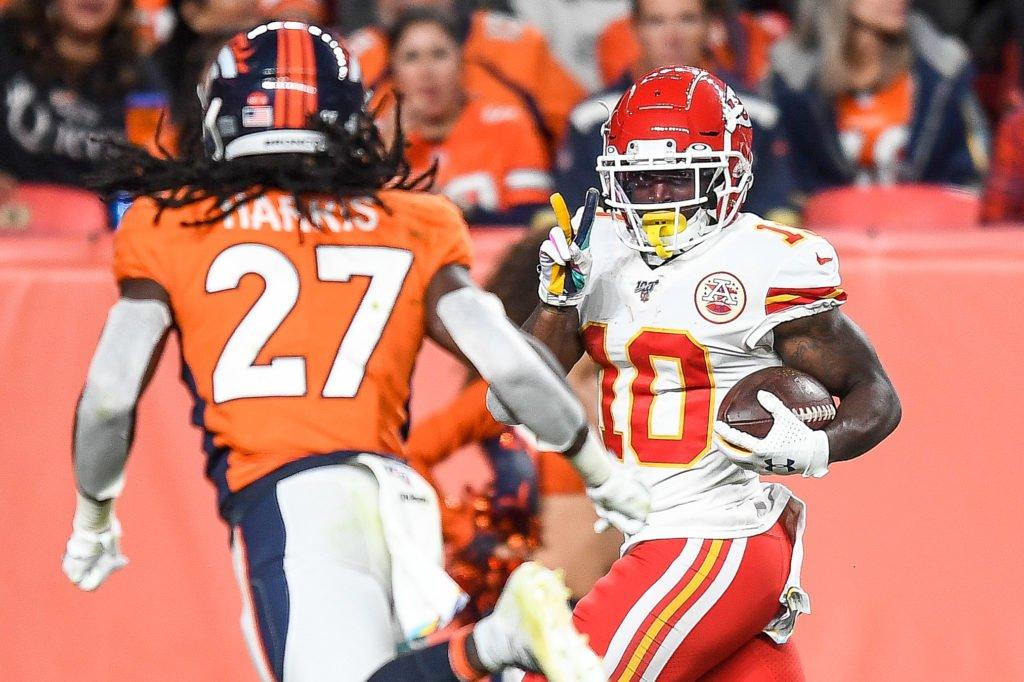 The Chiefs go for the season sweep and their 13th consecutive victory over all against the Broncos in the regular season finale in Denver.

The last time the Denver Broncos defeated the Kansas City Chiefs was September 17, 2015. Peyton Manning threw two touchdowns to Emmanuel Sanders, and Jamaal Charles rushed for 125 yards and a score before fumbling a carry in the fourth quarter that would result in a Bradley Roby scoop and score that proved to be the final margin of victory for the Broncos. Since then, Peyton Manning has been enshrined in Canton, we are on our third President (including Barack Obama, who was in office when this game took place), and the Chiefs have won 12 straight games over the Broncos. Today’s contest will wrap up a regular season of highs and low for the Chiefs, most recently highlighted by a wildly frustrating loss to the AFC North champion Cincinnati Bengals last week in Cinci. The loss dropped the Chiefs to 11-5 on the year, and the 2 seed in the AFC.

While last week’s narrow 3 points defeat to a fellow division champion is nowhere near the low point of this season – think back to the Bills and Titans games if you want some real gut punches – it did provide one of the bigger playoff implications for the team thus far this season. Every game is weighted equally in the NFL, that’s why they play them all, but a loss that late in the season in a “control your own destiny” scenario can be disgruntling to both a team and a fanbase. Lucky for the Chiefs, the loss comes on the cusp of a game against a longtime rival who over the last 5.5 years has been the cure for what’s ailing the Chiefs.  The contest does come at a time where the Chiefs have several questions to answer heading into a postseason where there are uncomfortably familiar parallels to last season in the injuries on the offensive line, signs that their top playmakers have been slowed in recent weeks – particularly Tyreek Hill, and 2 of 3 games where a majority of their secondary has been exposed by big passing days from opposing quarterbacks (Justin Herbert and Joe Burrow).

But here’s the good news. Throughout all of the highs and lows, the doubts, the concerns – the Chiefs are still winners of 8 of their last 9, have the 3rd ranked passing offense, 3rd ranked offense in total yards, and 4th ranked scoring offense in the NFL, and a defense that has gone from 32nd in the league in scoring to 13th after allowing 34 points to the Bengals in week 17. There is far more good going on in Kansas City leading into the team’s attempt at a third consecutive AFC Championship and Super Bowl berth than there is bad, and with a win in Denver today, coupled with a Titans loss to the Texans tomorrow the Chiefs could find themselves again with the top seed in the AFC and the AFC playoffs assured to go through Arrowhead Stadium. Also, the obvious – the Chiefs still have Patrick Mahomes under center.

Mahomes looks to add to his undefeated record overall against the Broncos and his undefeated road record against all AFC West opponents in his career on Saturday. But how does he get this done today? Let’s take a look at the offensive and defensive keys to today’s season finale against fierce rivals.

Offensively, the last time these two teams squared off the Chiefs offense didn’t do a whole lot to impress, although they didn’t really need to. KC’s offense only accounted for 1 touchdown (a 10 yard run by Mahomes), while Daniel Sorensen accounted for the other and Harrison Butker knocked in 3 field goals to tally up the Chiefs 22 point in week 13. One thing that stymied the Chiefs vaunted offensive attack in the matchup was the Broncos commitment to taking away Travis Kelce and Tyreek Hill. The pair combined for 5 catches and 49 yards, which is by far their lowest single game combined total. Granted, the flow of this game was very, very odd. The Broncos had a drive in second quarter of that game that ate up 11 minutes of game clock and resulted in no points. That’s almost an entire quarter the KC offense was on the shelf. But, assuming Drew Lock has maintained his inability to produce drives like that, the Chiefs offense should see more of the field today, and in that you should see more of the supporting cast get opportunities to shine. It will be key in the passing game for Byron Pringle and Mecole Hardman to show up today and take pressure off of Mahomes to try to find Kelce and Hill in double coverage. If they can get open and get to the 4-5 catch plateau each, the Chiefs passing game should fare much better than it did in week 13.

But, I’ve been beating a drum all season long, and I am going to keep beating it even though the Chiefs are not playing in a stadium with a drum deck this weekend. Darrell Williams and Derrick Gore have to be integral parts of the offense. Obviously in the run game, but also in receiving the ball out of the backfield. These two will be the most important pieces of the Chiefs offensive gameplan today if we want to find success against a fairly stout Broncos defense, who is playing their Super Bowl today. Williams has been nothing short of spectacular this season in relief of Clyde Edwards-Helaire, who has missed multiple games with multiple injuries, and Gore has emerged as an exceptional change of pace back to compliment Williams bruising style. Both of these guys should touch the ball a minimum of 10 times today. Get behind Creed, Trey, and Joe and cram the ball down the heart of the Denver defense. They are a group that are dangerous on the edges, but with the angriness with which the Chiefs interior offensive line plays, they should dominate this matchup from the inside out. Also along the offensive front, Orlando Brown is expected to play after missing last week’s game with a calf strain, and Andrew Wylie is expected to start a right tackle as Mike Remmers continues to work towards a playoff return from the IR. Lucas Niang was officially placed on the season ending IR yesterday.

Defensively, the Chiefs needs to bring more of the same. I mentioned that the Chiefs D has given up great performances and some points to Herbert and Burrow in 2 of the last 3 games, but I should have added an asterisk to both of those. Against the Chargers, the Chiefs were missing Chris Jones, Willie Gay, and L’Jarius Sneed – arguably the most important player at each level of the defense. Against the Bengals, well…Ja’Marr Chase had a game for the ages, and the replacement officiating crew that look completely lost kept 4 drives alive for the Bengals with questionable calls that ended up costing the Chiefs 3rd and 4th down stops and assisting the Bengals towards 20 additional points. That’s tough. I will say though, one thing I noticed last week that needs to be put in check by the KC coaching staff – we might not have gotten the calls we go in the second half had Rashad Fenton not been so blatantly outward in clapping, smiling, and yelling at the officials when they called him for legitimate pass interference penalties. Talking to your opponents is one thing, but when you start doing it to the refs the team is very clearly going to get targeted.

The last time these two teams squared up the Chiefs defense was suffocating. Before the Broncos scored their lone touchdown with 7 minutes to go in week 13 (the score at the time was 22-3), here is how their drives panned out :

The defense had 9 passes defensed and 8 QB hits on Teddy Bridgewater, but only 1 sack. One thing to watch for today will be Chris Jones. He’s 1 sack away from unlocking a $1.25 million incentive in his contract for this season. You would have to think that’s going to motivate the big man to get after Drew Lock a little bit today in Denver. If I’m Melvin Ingram and Jones hits the payday today, I’m subtly letting him know what I didn’t get for Christmas that was on my list – since Ingram has joined the Chiefs and Jones has moved back into his natural habitat full time, he has amassed 6 of his 9 sacks he has so far. So if you get paid, let Melvin wet the beak a little bit, Stone Cold.

Like everyone else in Chiefs Kingdom, my mind is mostly on next week and who the Chiefs will square off against in the playoffs. While this week is a must win, and I am confident that Andy Reid and the Chiefs coaching staff have the players focused that direction, it’s tough to get too excited about a Saturday game with the Broncos. But it’s a good chance to get the grill fired up (even though it’s freezing in KC), drink some day beers on Saturday, and not worry about the Sunday scaries and Chiefs scaries in the same day. We can divide and conquer the weekend. And if the Chiefs can establish a physical presence on offense, have Byron and Mecole keep bringing it in the receiving game, and dial up more of the same defensive game planning they had against Denver the first time around, none of us should have to fret too much about the outcome of this Saturday game. One time, after I played a particularly bad game my junior year in high school, my head coach told me I had a decision to make – I could either sit there and mope and keep getting pissed on, or I could get pissed off. The Chiefs come out pissed off today, make an example of the Broncos, and give us all something to look forward to in the next 5 weeks. It’s going to be a fun ride.