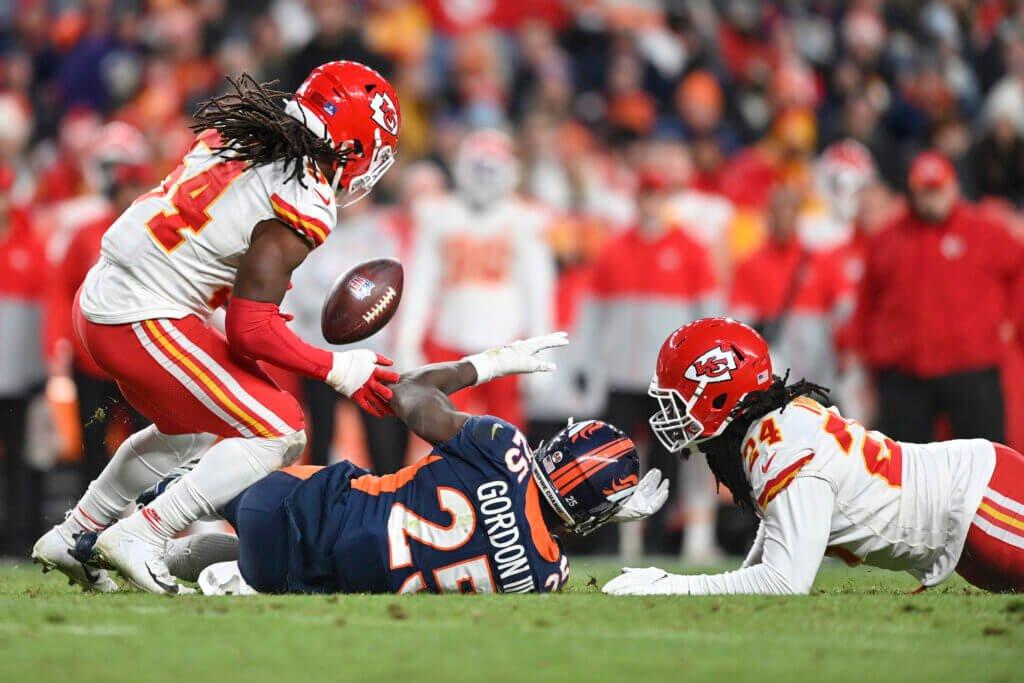 Following a 28-24 win over the Denver Broncos in the season finale, and a wild slate of early games on Sunday, the Chiefs prepare for a Wild Card round rematch.

It’s very hard to look back on Saturday’s game with so much going on across the league today. While Chiefs Kingdom hitched their wagons to the Texans for their upset attempt against the Titans – one that almost came to fruition – the real Cinderella story of the day came from the Jacksonville Jaguars. The Jags, behind a stout defensive performance, beat up on the Indianapolis Colts and with a Steelers victory over the Baltimore Ravens in a rainy overtime affair in Baltimore, the Colts and Ravens were both ousted from playoff contention.

There is some more shuffling to be done with the remaining seeds in the AFC – at the moment, the Bills lead the Jets and the Dolphins are trouncing the Patriots, which would give the Bills the 3 seed and the AFC East championship, and we still have to see what happens in the Raiders Chargers game tonight. But from the looks of things, the Chiefs will be taking on the Steelers at home next weekend in a rematch of a week 16 matchup that saw the Chiefs blow the Steelers out without Travis Kelce, Nick Bolton, and Harrison Butker. There is a chance the Chiefs could get a third matchup with the Raiders, but that would require the Chargers and Raiders game tonight to end in a tie.

But let’s take a second to travel back in time before today’s games get too much crazier. I’ll start by saying that the Chiefs last night looked like their focus was not the Denver Broncos. It’s tough to blame them, with the playoffs imminent coupled with the uncertainty of whether or not they would receive a bye in the first round, it would be pretty easy to look past a game that you should in theory breeze through. We have to remember – these guys are human. But the performance did not exactly stir up a good deal of confidence, particularly in how the team defended the run against Denver. The Broncos rushed for 192 yards and 3 touchdowns on the Chiefs, including 2 from backup quarterback Drew Lock.

Andy Reid eluded to the fact that the Chiefs would rotate heavily on the defensive line on Saturday, and it played out that way in the game. The second line of Derrick Nnadi, Alex Okafor, Mike Danna, and Tershawn Wharton were on the field nearly as much as the starting battery of Frank Clark, Chris Jones, Jerran Reid, and Melvin Ingram, and played well for the most part. The rotation and lack of being able to “settle in” on the defensive front was likely a driving factor in the degree of success that the Broncos found in the ground game, but we have to expect that the fab 4 will see a healthier chunk of the snaps in postseason play. It is always, always good to have the second unit acclimated to real game reps, and they have certainly seen those in the few weeks leading into the playoffs.

There was, however,  a lot left to be desired from the defensive play calling and personnel moves from Steve Spagnuolo for the second week in a row. On multiple occasions last night, on 3rd down and varied distances, the Chiefs defensive coordinator opted to have Anthony Hitchens, Ben Niemann, and Daniel Sorensen on the field instead of keeping Nick Bolton and Willie Gay on the field. Multiple times the Chiefs looked lost defensively in third down situations, missing tackles and generally appearing very reactive to what Denver was doing offensively – which, frankly, shouldn’t have been a surprise. Spags will without question have to sharpen his pencil heading into the playoffs. Even if the Chiefs get the Steelers in the Wild Card round, Najee Harris is a dangerous weapon and Big Ben can make some things happen with the stable of receivers that the Steelers have. The Chiefs can’t afford to look past another opponent, even if the divisional round promises the Chiefs either the Bills, Chargers, or Bengals (more than likely). Chris Jones also missed out on a $1.25 million incentive bonus by not registering a sack in last night’s game. He ends the regular season with 9, and ended last night without as much as a tackle. He will bring it in the playoffs, he always does, but that was not his best performance.

Offensively, KC was pretty vanilla. A couple of bright spots showed up for the Chiefs, though, and could be a very promising sign moving into the postseason. With Tyreek Hill limited with a heel injury he suffered in warm ups, Mecole Hardman shined. The third year, much maligned wide out was targeted 11 times and had 8 catches for 103 yards – the first 100 yard receiving performance of his career. The Chiefs needed him to show up, and he did in a big way. After Darrell Williams was put on the shelf with some toe discomfort in the second quarter (more of a precautionary move, from our understanding), Derrick Gore and Jerrick McKinnon literally and figuratively took the ball and ran with it. McKinnon had 8 touches for 50 yards and a receiving TD, and Gore added 7 carries for 30 yards to help the Chiefs maintain a presence on the ground against a physical Denver front 7. But the real key to the Chiefs offense, and something that is incredibly encouraging for the Chiefs going into the playoffs, was the mobility of Patrick Mahomes. The Chiefs QB racked up 324 total yards, including 54 on the ground on 9 rushing attempts, and kept the Denver defense guessing all night. Add two touchdowns through the air (the one to McKinnon, and another to ol reliable Travis Kelce), and Mahomes pushed his road record vs. divisional opponents in his career to 12-0.

For the second week in a row, a player whose name should not be a household name tried to drive the Kingdom crazy. Zayne Anderson, an undrafted free agent from BYU who was elevated from the practice on December 14th, committed another penalty that hurt the Chiefs immensely on special teams. Last week it was a hold on a Byron Pringle kick return that went to the house for a touchdown, this week it was a running into the punter call that kept a Broncos first half drive alive and ended in Drew Lock’s second rushing touchdown of the game. They say NFL stands for “Not For Long” pertaining to the length of players careers, and mistakes like this could turn your “career” into a very brief stint. Let’s hope the team cleans this up this week in practice, whether it’s with 39 or the next man up.

We won’t avoid the elephant in the room in this game – Nick Bolton and Melvin Ingram were the heroes of the Kingdom’s Saturday night. In a game that didn’t give us much to get excited about, the timing of their game changing collaboration could not have been better. With 7:42 to go in the game, and the Broncos threatening another score at the Chiefs 9 yard line – potentially getting ready to go up 28-20, Ingram collided violently with Broncos running back Melvin Gordon, dislodged the football, and Nick Bolton did the rest. 91 yards later, Bolton’s touchdown return gave the Chiefs the 28-21 lead, and outside of a late Denver field goal the score wouldn’t change. The Chiefs had iced their 13th straight over the Broncos, and 9th win in their last 10 games in 2021.

As we mentioned up top, the Broncos announced this morning that they were parting ways with head coach Vic Fangio. Fangio compiled a 19-30 record with the Broncos in his 3 years with the franchise. Upon hiring Fangio, the former Chicago Bears defensive coordinator and renowned defensive mind, the Broncos plan was to attempt to minimize the “Mahomes” effect, and help to stimy the Chiefs offensive onslaught that had just begun to take the AFC West by storm. That clearly didn’t pan out, Fangio never beat the Chiefs, and now the Broncos will be on the search for their fourth head coach since 2016. It’s tough to build something when you’re constantly starting over, so it will be interesting to see which direction Denver turns from here.

As for the Chiefs, now we wait. While it’s a high likelihood that the Chiefs will play the Steelers next weekend at Arrowhead, this has been a wild final day of the 2021 season, and anything is possible. If the Raiders and Chargers tie, we will play the Raiders next weekend. The date and time of next week’s matchup remains to be determined, we will update you all as the matchups and times are confirmed.