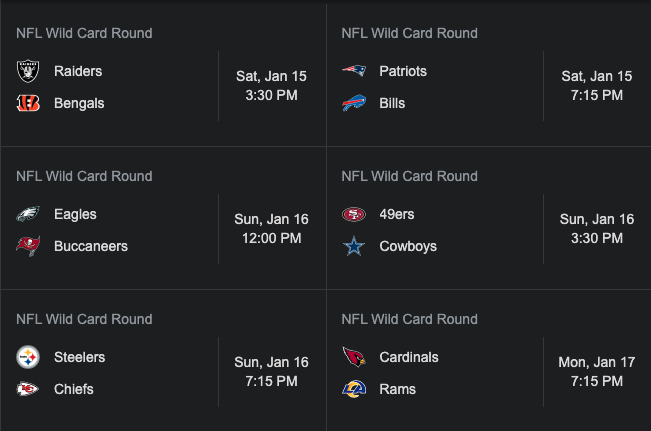 We look ahead to the coming weekend’s matchups, potential storylines, and a whole lot more. Follow along this week on all Chiefs Focus social media platforms, the 1st and 10 Podcast, as well as the blog for coverage and insights.

A wild end to the regular season leads us right into the “Super” Wild Card weekend. The league added “Super” to the Wild Card weekend festivities last year upon expanding the playoff field, giving us more football on the table to devour this coming weekend. We’ll undoubtedly see upsets. We’ll see a game (Cowboys vs. 49ers) simulcast on Nickelodeon for the second time, and a new NVP take the throne currently occupied by all time great Mitch Trubisky. We’ll see regular season rematches – in 2 cases, the third game between division rivals. We’ll see 6 teams punch their tickets to the divisional round while the Titans and Packers sit and wait to see who their opponents next week will be.

I’m having issues containing my excitement for the coming weekend, so let’s jump in to how to watch these games, and the storylines we’ll be looking to unfold this weekend!

On the Call : Mike Tirico and Drew Brees

On the Call : Ian Eagle and Charles Davis

On the Call : Joe Buck and Troy Aikman

Stay tuned to the blog all week for coverage on these games, as well as in depth coverage on the Chiefs and Steelers Sunday Night matchup at Arrowhead Stadium!