Inside the Matchup : The TJ Watt Affect 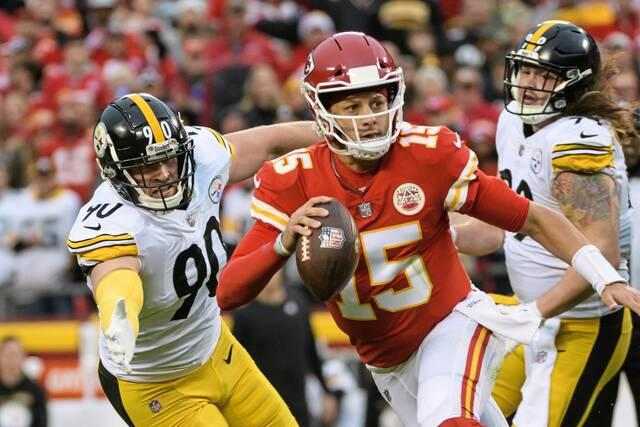 Steelers superstar edge rusher TJ Watt was limited the first time the Chiefs and Steelers squared off with cracked ribs, but what will his availability be on Sunday and how can he impact the game?

When the Chiefs take the field against the Pittsburgh Steelers in the Sunday nightcap of Wild Card Weekend, they will undoubtedly have an intense focus on number 90 in black and gold. TJ Watt not only demands attention, he is the type of player that you have to craft an entire gameplan around. The first time these two teams played, a mere 4 weeks ago, Watt was limited with what were rumored to be cracked ribs, and his impact was minimal. He registered zero sacks on Patrick Mahomes, and only 1 tackle for the game. Watt played just 38 snaps against the Chiefs, 55% of the Steelers defensive snaps, and was quieted by Andrew Wylie and Orlando Brown while he was in. While the Pittsburgh defense certainly isn’t all Watt – players like Joe Haden, Minkah Fitzpatrick, and Cameron Heyward are all standouts with Pro Bowls and All Pro honors accumulated throughout the course of their careers – he is the engine that drives their success.

When he has been healthy this year, Watt has been a game wrecker. Three times this season he registered over 3 sacks in a game – against the Bears on November 8 (3 sacks), against the Ravens on December 5 (3.5 sacks), and against the Browns January 3 (4 sacks). In fact, he has nearly as many games with 3+ sacks (3) as he did games where he did not register a sack at all (4). On the year, Watt tied the single season sack record (22.5) set by Michael Strahan 20 years ago. Some might say “well yeah, Charles, he had an extra game to do it.” This is true, but he also missed a full game, and parts of 3 others with injuries. The extra game certainly didn’t hurt him, but he was not on the field for a full 17 games. Strahan started and played in all 16 games for the Giants in the 2001 season, when he set the record. So, regardless of argument, the season Watt had was a very least the co-most impressive pass rushing season of all time.

So how much does Watt affect the overall performance of the Steelers defense? A lot, to say the least. Through 13 games this season (the most recent advanced metrics I found on his impact – courtesy of Aditi Kinkhawwala @AKinkhabwala on twitter) the difference was daunting :

So, with these metrics baked out, the final 4 games of the season looked like this for Pittsburgh:

On the year, when TJ Watt played over 40 snaps, the Steelers were 9-2 and much, much more stout defensively. Without him playing under – 0-5-1. While his ribs may be on the mend, he pulled up with a groin injury against the Ravens last weekend after setting the sack record. We will see how healthy he is come Sunday, but we know how the numbers shake out, and how he can impact a game.

So how do the Chiefs minimize his impact if he does in fact play 40+ snaps on Sunday? Well, it will start by taking some lessons learned from the loss at Cincinnati two weeks ago. When Orlando Brown went out and Lucas Niang injured his knee on the second drive of the game, the Chiefs were forced to move into an emergency offensive line grouping with Joe Thuney bumping out to left tackle and Nick Allegretti playing left guard. Thuney performed extremely well, but there was certainly help there for him. The KC coaching staff did an excellent job maximizing the presence of Blake Bell and Travis Kelce on passing plays in the protection scheme, regularly chipping on Trey Hendrickson before releasing on routes. While Kelce didn’t have a world beating game, he still hauled in 5 catches and a touchdown. Bell had a season high 3 catches for 35 yards. You also have to consider that was Kelce’s first game back post-COVID. They also utilized the running backs well, with Darrell Williams playing a big role in pass protection as well. Jerrick McKinnon flashed in this aspect last week against the Broncos pass rush, so expect him to be utilized on third down passing plays to help slow down Watt if he is indeed “on one” on Sunday.

Pass protection is always important in negating a great pass rusher, but the best way to slow down a great pass rush is to keep them on their heels. Keep them guessing. The running game does just that. The Chiefs rushed the ball effectively against the Steelers in week 16, gaining 127 yards. They did just average 3.8 yards per carry, but the more important aspect of establishing the run this Sunday will be dictating the physicality of the game. If the bruising offensive line of the Chiefs can rough up the Steelers defensive front, TJ Watt in particular, the pass rush will be slowed by that impact as well. The Chiefs offensive line have played well in their 9-1 stretch to end the regular season, only allowing 1.4 sacks per game in that time frame. Coincidentally, Patrick Mahomes has only thrown 4 picks in those 10 games.
On the season, the Chiefs have are tied for the best pass block win rate as a unit (68%, tied with the Rams), and have the top center in pass block win rate (Creed Humphrey – 98%), top guard (Joe Thuney – 97%), and second rated guard (Trey Smith – 96%). Run block win rate as a unit the Chiefs are tied for second at 74% (tied with the Phildadelphia Eagles), Humphrey is 5th among centers at 72%, Smith third among guards at 75%, and Orlando Brown tied for first among tackles at 81%. If there is a team that can slow down a historically great pass rusher like TJ Watt, it is this version of the Kansas City Chiefs. Now we wait until Sunday to see how they actually attack him, and the Steelers defense.