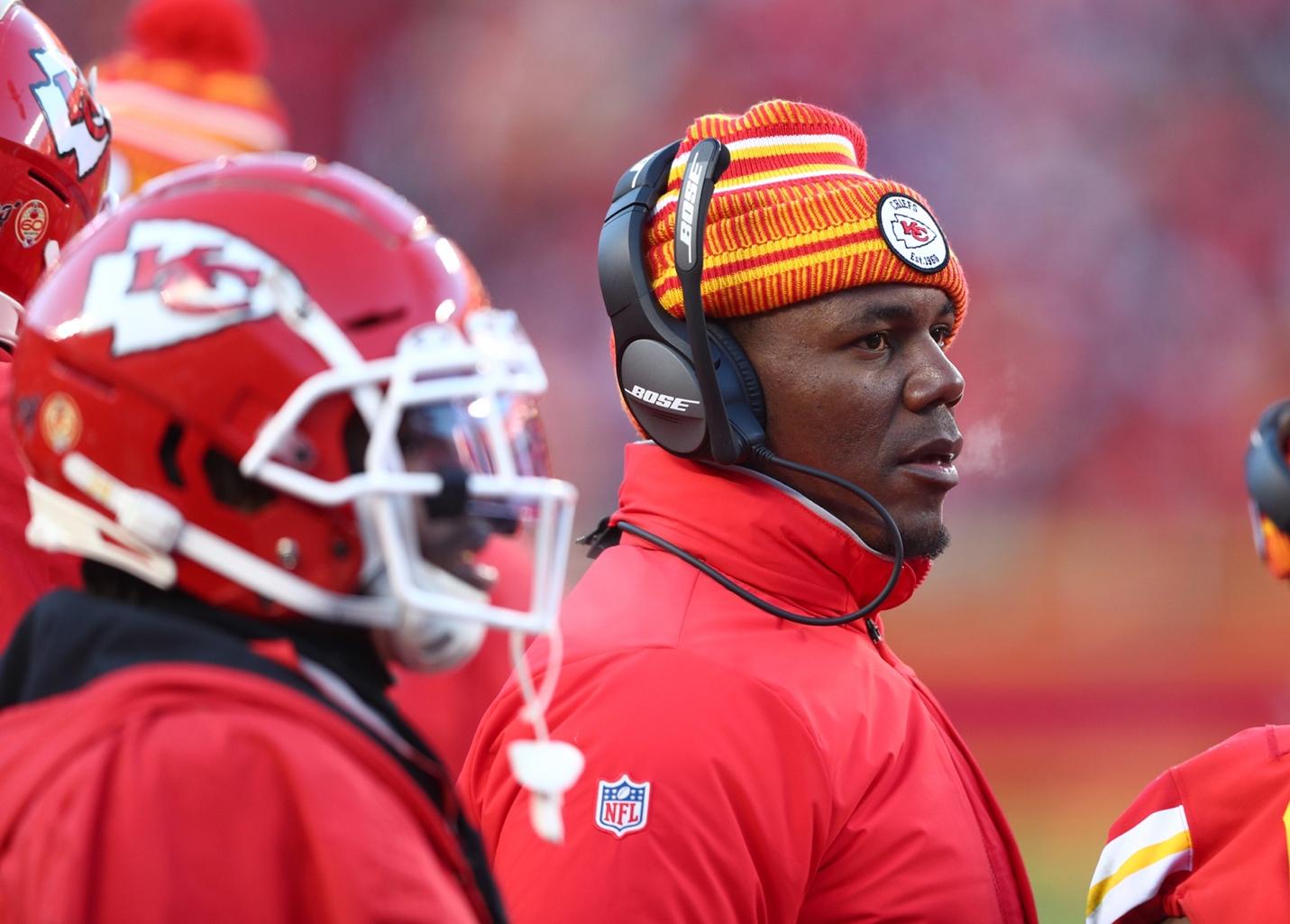 We reported on Monday that the current Chiefs offensive coordinator would certainly be taking on a new role with a different team in 2022, here’s an update on how that is progressing.

On Monday numerous outlets reported what we knew on Sunday – that the Denver Broncos had requested permission to speak to Chiefs offensive coordinator Eric Bienemy about their head coaching vacancy left after the firing of Vic Fangio on Sunday. Since then EB’s name has come up, as expected, in numerous coaching search conversations and rumors – both for head coaching roles, and offensive coordinator positions around the league. Let’s dive in to who’s interested and what steps have been taken by each franchise.

The Vikings fired Mike Zimmer on Black Monday, leaving their head coaching vacancy wide open. Sources have told us that Minnesota is eyeballing Bienemy as Zimmer’s replacement, requesting an interview and being fairly open about him being the “front runner” for the job at the moment. Bienemy would inherit an offensive football team with Dalvin Cook, Justin Jefferson, and Adam Thielen, with a decision to make on whether or not Kirk Cousins is indeed the quarterback of the future in the Twin Cities.

Some reports are listing Bienemy as the favorite for the Dolphins job as well, and they have requested an interview, but given Dolphins owner Stephen Ross’ track record, this might be a long shot. Ross is notorious for setting up interviews simply to meet all requirements under the league’s “Rooney Rule” for minority coaching candidates. Our sources have gone as far as to say that Ross hired Brian Flores initially because he knew there would be draft compensation coming his way eventually.

The Giants have yet to formally request an interview with Bienemy, but have certainly kicked the tires and will request one in the coming days. The last couple head coaching hires the Giants have made with offensive backgrounds have not panned out (Ben McAdoo and Pat Schurmur) but Bienemy’s resume as an offensive coordinator and the results he’s (helped) produce have been far superior to both McAdoo and Schurmur.

In the past 2 days there have been murmurs from a team on the west coast (cannot release the information yet, as they have not made a decision on their current head coaching situation) that there is interest there in Bienemy. Rumors are that the team is considering whether or not to retain their current coach, the coach is contemplating retirement, and if they do keep him and he decides to stay, the likelihood of Bienemy accepting a role as offensive coordinator with a “Head Coach in Waiting” tag. There is a lot to pan out with this scenario, and we will keep you up to speed as we know more.

These three squads are in the market for new offensive coordinators, and Bienemy is squarely on their radar. To our knowledge, no formal requests have been made at this point, but should Bienemy not land a head coaching job, one of these three teams would be a likely landing spot for him next season, as Mike Kafka is poised to be the next offensive coordinator in Kansas City.

Check back for more updates as the week progresses. As is the case with all scenarios of this nature, the information is always changing and evolving. We will keep the Kingdom up to speed in real time as updates come our way.