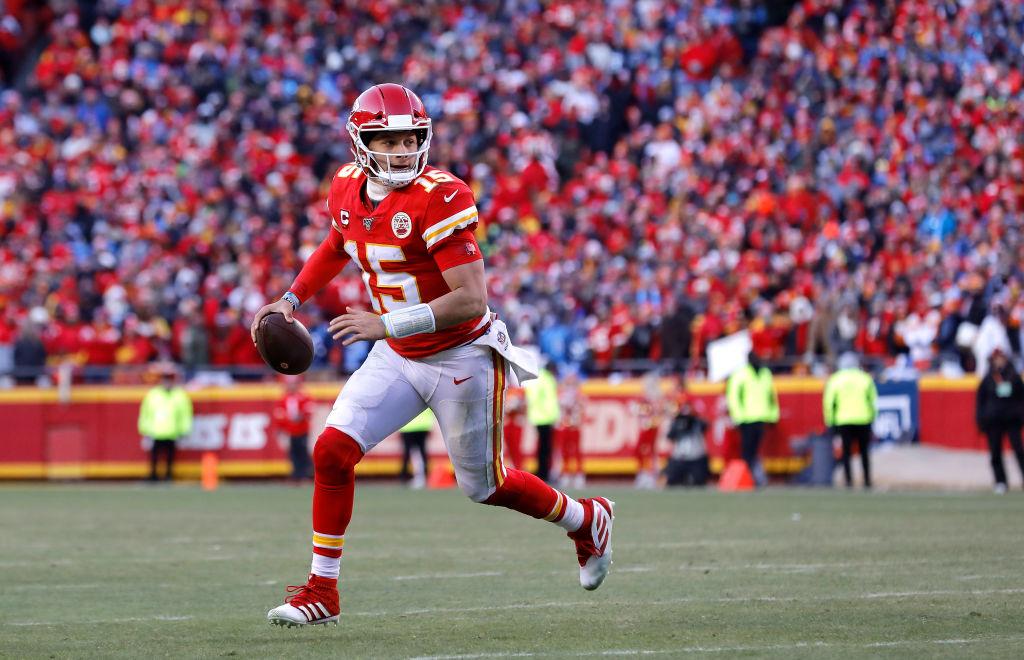 A Kansas City winter is something that might not conjure fear to those who have never been here to experience it, but for those who live here there is a more than healthy respect for the season. The brisk northern winds, temperatures that seem to always find their way into single digits at least once in January, and a high humidity that make the air sting a little extra make Great Plains winters some that are certainly not for the faint of heart. But those temperatures seem a little crisper, you can feel the defined physical chill in the air, and the winds blow a little more recognizably when the winter morning you are waking up into is the morning of a Kansas City Chiefs playoff game.

I’ll get into the X’s and O’s and keys to the strategy of this game in a second. But I want to set a stage and create a mindset for the entire Kingdom – both those watching from home today, and those at Arrowhead Stadium.

With this being a 7:15 PM kickoff, gates are supposed to open at 2:45 PM. You pull up to the exit ramp off of 435, 70, wherever you’re coming from, and cars, trucks, busses, sprinters – everyone is already lined up all the way back to the highways to get in. So the gates open early, and 150,000+ Chiefs fans – some there just for the tailgate – begin a journey for today that has been planned, packed for, and is about to be executed. In the next few hours, 77,000 fans enter the gates of Arrowhead Stadium, a vast majority being members of Chiefs Kingdom, and take the place by storm. For those ~3 hours of gameplay, the fans and Arrowhead Stadium become one. They work together to create what is undoubtedly the most distinct home field advantage in the NFL, and likely in all of north American professional sports. The metal paneling on the way up the tunnels to the 200 and 300 level mezzanines serves as a collective drum for the entire Kingdom, in each of the 4 corners of Arrowhead. Inside, the back of the seat belonging to your neighbor in front of you (in the best cases, a fellow Season Ticket Member who you’ve been seeing on Sunday’s for years) is your drum. It’s what you’re going to slap your (hopefully gloved) palms against for the next 3 hours, creating chaos for Ben Roethlisberger and the Pittsburgh offense. It’s jumbotron acts as your TV, phone, computer – everything when you’re in the stadium. And the team on the field is what is going to will these fans and the stadium they have running through their veins to make more noise than any other place on the planet today.

There is no place like Arrowhead, an overly used line that becomes more and more true as this franchise continues to blossom from a chippy playoff team with a QB that doesn’t lose you the game to a perennial favorite who is looking to 3-Peat as AFC Champions and get another crack at a Lombardi trophy after last season’s disappointing end. The Patrick Mahomes era of Kansas City Chiefs football has seen it’s fair share of instant classic playoff games inside of the walls of Arrowhead Stadium. Tonight, another chapter will be written in the story of this quarterback, this team, and this stadium.

Pittsburgh enters this game on a bit of a mini-roll. They closed out the season with 3 out of 4 wins, 2 of which were against teams squarely in the AFC playoff picture. Behind the likely Defensive Player of the Year worthy play of TJ Watt, the Pittsburgh defense showed its teeth late in the season, particularly in games against the Tennessee Titans (forcing 4 turnovers) and Baltimore Ravens (holding their hated rival to 13 points in a win or go home game for both teams). We all know where Big Ben is at at this point in his career. He’s not who he used to be, but he can still hurt, you, especially if you let the Steelers hang around in games. They have the ability to hand the ball off to Najee Harris, which is a benefit a lot of NFL teams would like, but they haven’t been able to really get him going like they’d like to in the back half of the season. If Pittsburgh can commit to running their offense through Harris, allowing their wide out talent to capitalize once defenses are drawn in, and play surgical football, their offensive can be dangerously effective.

But the fact of the matter here is that these two teams played against each other the Sunday after Christmas. Week 16 of the regular season Pittsburgh visited Arrowhead for the first time this season, in a late season must win game for the Chiefs, an atmosphere that resembles but does not replicate the atmosphere of a playoff game at Arrowhead. If you’re reading this, you know what happened that day. The Chiefs did not, in fact, let the Steelers hang around. And they did so with an offense that did not include Travis Kelce, a defense that did not include Nick Bolton, and a kicker named Elliott Fry who performed admirably, but had more “Linn Elliott Fry” twitter drafts discarded that he likely had positive tweets towards him. The Kingdom appreciates his service, Twitter is just a mean place.

I wrote about the main key to this game earlier in the week, and I’ll stick by my assessment – if there is a plan to negate or minimalize TJ Watt’s impact on the game assuming he is in for a majority of the game, the Chiefs should offensively be able to craft some good strategies around that. Utilizing Blake Bell, Noah Grey, Darrell Williams (likely on a limited basis coming off of a toe injury), and Jerrick McKinnon in pass pro situations, even with just a chip, is going to be needed. The offensive line, who has played at an unbelievable level this season, is going to have to be on top of their game not just physically, but from a communication standpoint. “Help” and “mine” are going to be words uttered a lot down there today dealing the Steelers front. But if they can get this done, and Playoff Travis Kelce does what he has always done in the playoffs – produce – the Chiefs offense will be a in a position to score points early and often on Pittsburgh,

Defensively the Chiefs are going to have to find out a way to have eyes and pads on Najee Harris at all times. Yes, the Steelers have dangerous receivers that can hurt you in a lot of ways, but Roethlisberger does not have the arm at this point in his career to hurt the Chiefs secondary downfield the way guys like Justin Herbert and Joe Burrow have at times this season. That can’t be placed entirely on the Chiefs corners, either, but I’ve been clear about my position on Spagnuolo’s play calling and personnel so I won’t dive into it today. But, having said that, it has to be different if we don’t want this to be a stressful night. Nick Bolton and Willie Gay will be a welcome combination this time around against Pittsburgh. Bolton led the Chiefs in tackles this season, but did not suit up against Pittsburgh in week 16. But, again, let’s all be real about what can and likely will happen tonight that will key the Chiefs defense to a successful evenings. Remember those chairs and that paneling I was talking about people beating on all night tonight inside of the stadium. Those come alive on every down now days, but especially on third downs, when an opposing offense is trying to operate. Big Ben may have work arounds, but the current incarnation of the Steelers offensive line appeared to have no idea how to maneuver it in December, and it’s going to be worse tonight. The pass rush, behind Chris Jones, Melvin Ingram, and Frank Clark, should be able to produce at the very least pressure, and more than likely a few sacks tonight against an immobile quarterback with a leaky offensive line.

Offensively it’s the same prescription we’ve been calling for all season. Balance. Establish the run and stick to it, behind these rhinos on the offensive line. Allow Mahomes to work himself into a rhythm, and take advantage of the deep shots that the running game and intermediate passing game are going to give you when they are gone to consistently. It’s going to be the same song and dance with Tyreek Hill, especially if he’s got Joe Haden and Minkah Fitzpatrick to deal with in a bracket scenario (likely won’t be the whole game, but he’ll see that combo more than once). Teams have essentially said “beat us somewhere else”, and the Chiefs have figured that out as well, making them one of the league’s most dangerous assassins on the offensive side of the ball. If Darrell Williams toe is good, and all signs are pointing to yes on that, he should be able to establish a thundering running presence with Derrick Gore there to change the pace on the Steelers D and Jerrick McKinnon to eat a little in the run and pass game.

I am one of the most superstitious sports fans in the world. ESPN nailed it with their ad campaign about sports superstition – it’s only crazy if it doesn’t work. I will not be at Arrowhead Stadium today, like I have been in years gone by. But I will be at home watching. I’ll be wearing the same socks, underwear, and shirt/hoodie combo that I have been wearing for weeks. But I will admit I had to reshuffle a couple times before settling in to this in week 8. But I will be there in spirit with the 77,000+ members of the Kingdom in attendance willing the Chiefs to what will be, no matter how it ends, the first step of the Chiefs 2022 playoff run. It does not end here tonight. I’ll leave you with the most overwhelming stat I saw this week. Patrick Mahomes is 49-3 in his career – a .942 winning percentage – when the team the Chiefs play does not reach 30 points. The Steelers are not getting 30 tonight against this team in this stadium. I like our odds.

5 ways the Chiefs can beat the Bengals this Sunday

Winners and Losers from Divisional Weekend

A hobbled Patrick Mahomes led the Chiefs to its fifth straight AFC Championship game win a 27-20 victory over the Jacksonville Jaguars.

Limited edition Bobbles are out!