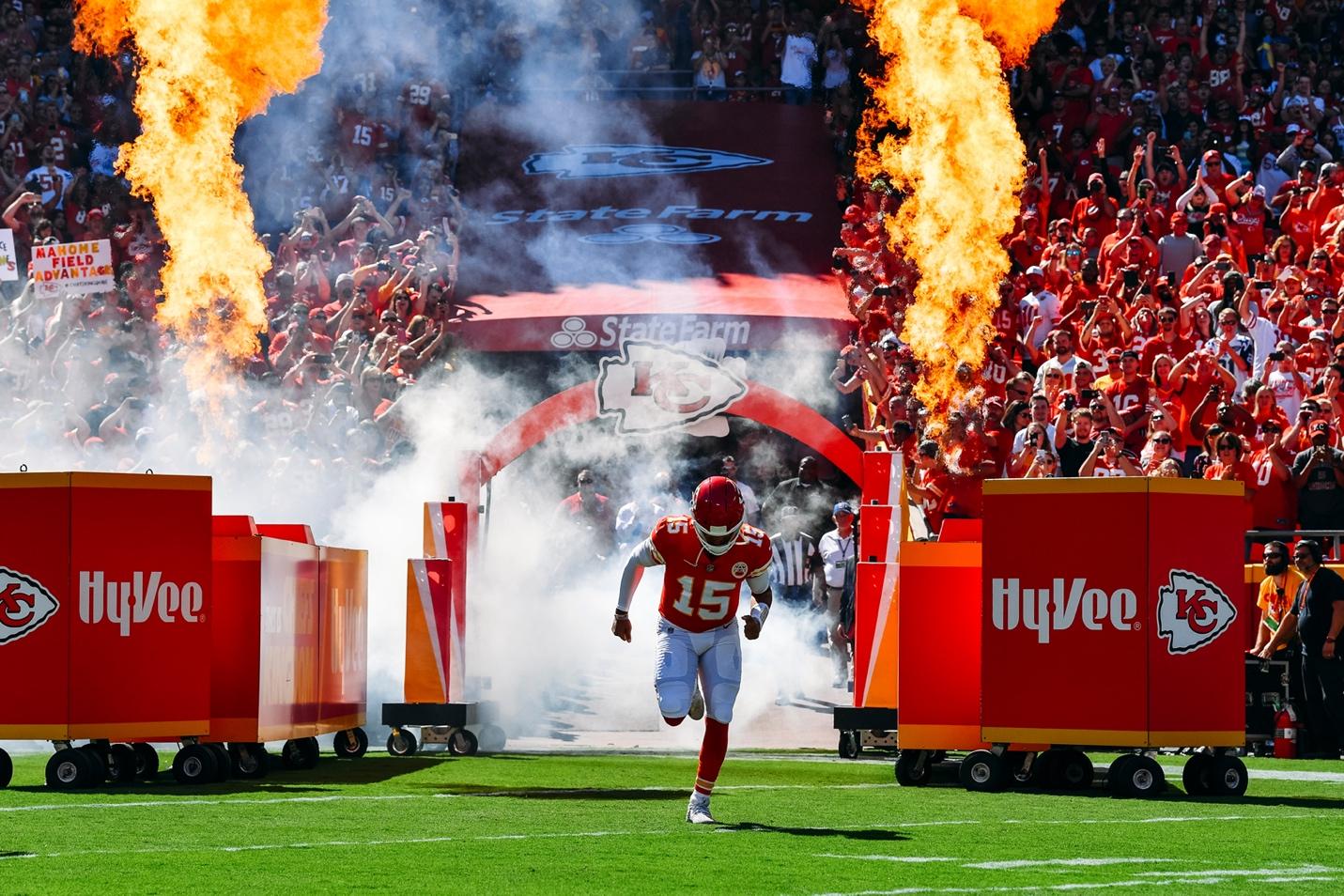 Joe Burrow and the Bengals beat the Chiefs in Cincinnati in early January at “The Jungle”, but this time around the two will face off inside of Arrowhead Stadium – the loudest stadium in the world.

“Arrowhead is the loudest outdoor stadium in the league. It’s so loud you can’t hear yourself think.”

“The one thing I remember the most is that it was loud. As a quarterback, that’s your worst enemy.”

“It always makes it more difficult when you can’t communicate because of how loud it is. It’s a great challenge. There’s no secrets. When it’s loud, and they’ve got good pass rushers, it’s tough.”

“I’m telling you, it plays a bigger role than what people may know. It’s very loud in that stadium, and you can sense that energy gives them an extra boost and motivation. And that’s what makes it a very tough place to play. I’ve played at Arrowhead a bunch of times, and it’s very difficult to hear what’s being called and what’s being checked to. Obviously if we check to a run and you run a route, the guy makes a play in the backfield and you heard that crowd get even louder.”

“They have a good environment, a great environment to play football, you just have to stay focused. They did a good job making it loud and we had a lot of pre-snap penalties. Those are things you can’t do in order to win games on the road.”

“You look at the statistics just of the crowd noise, I think when we went up to Minnesota it was about 120 decibels where Arrowhead has been up to 140. So that’s what we’re preparing for. It’s an incredible environment. Not a lot of our players have played there so just give them a snippet of what it looks like today and what it sounds like. Noise will be a big part of our preparation this week.”

I’ve experienced this firsthand as a fan. In regular season games, and especially playoff games, the noise is deafening. You leave the stadium with a ringing in your ears that persists for a minimum of 24 hours, and a hoarseness in your voice that you might not shake until the following Sunday. Your palms are raw from banging on the seat in front of you and clapping far harder than the human body was meant to clap. It’s something that we all know, but visiting teams and players try to downplay – until they’ve experienced it firsthand. If you tuned in to the Chiefs-Bills Divisional round matchup last Sunday, you noticed it through your TV screen. If you didn’t tune in to that game, you’re either not a football fan or you’re an idiot. But the point stands regardless of your designation. Arrowhead Stadium is the loudest stadium in the western hemisphere, and has the highest recorded decibel output on record at 142.2 recorded by Guinness World Records in 2014.

The quotes above aren’t just from guys who may have been overwhelmed because they’re fringe NFL players. These are, for the most part, Hall of Famers. Mark Ingram is still playing, and Antonio Gates and Joe Thomas have a couple years before they’re eligible for the Hall. Both will almost certainly be first ballot hall of famers in 2023. All of the rest of them? Canton. Mike McCarthy is the lone exception, but he has guided almost every team he’s coached to the playoffs, and won a Super Bowl with the Green Bay Packers. To say that their accounts of the Arrowhead Effect are legitimate would be an understatement.

The level of noise we are talking about can’t truly be understood until you’re actually there. Sure, you can see cameras shaking at times on TV. You can see the tens of thousands of fans, hands cupped around their screaming mouths in between doing the tomahawk chop while chanting the Chiefs war chant. But until you’re there, particularly during a playoff game, you really don’t get it.

Over the last 5 seasons the Chiefs are tied with Green Bay for most home wins in the NFL at 31. Those pre-date the Patrick Mahomes era, so how has the Chiefs franchise QB fared? Mahomes has played 30 home games in his NFL career. In those 30 games he is 24-6, good for a .800 winning percentage. He has now played 8 playoff games at Arrowhead as well, and in those 8 has compiled a stellar 7-1 (.875 win percentage) record with his only loss coming in his first postseason to Tom Brady and the Patriots in an overtime thriller. While Mahomes has been dominant, the real impact that Arrowhead has on the Chiefs performance comes from the defensive side of the ball. Take a look at Chris Jones, Frank Clark, Willie Gay, and Tyrann Mathieu on Sunday when the Chiefs take on the Bengals. The defense uses the crowd as a boost, sucking up the energy from those 76,000+ fans in attendance to get as much pop into each snap as possible. Jones in particular is one of the biggest ring leaders in getting the crowd as amped as possible. They take advantage of it early and often. The Chiefs defense was 5 points better this season at home as opposed to one the road, and were far better in other important statistical areas as well. At home in 2021, the Chiefs snagged 9 interceptions from opposing quarterbacks compared to 6 on the road. The KC defense netted 21 sacks at home this season compared to 12 on their opponents homefields. Their 5.3% sack rate in home games also beat out their away sack rate of 4.2%.

In October, when asked about the crowd noise that he experienced during a road win in Baltimore, Burrow responded by saying “We knew that they were gonna be jacked up for us to come in, and expecting to beat our ass. But we were ready for it. Playing in the SEC definitely, definitely helped. Gets way louder in the SEC than in any of these NFL Stadiums.” I’m not going to dog Joe Burrow for saying that the SEC gets louder than M&T Bank Stadium. That’s probably true. But with some foresight he probably should have known that a trip to Arrowhead was in his future sooner or later, and this would get dug back up.

I understand that there are over 100,000 fans in the biggest stadiums in the SEC. Death Valley in Baton Rouge, LA (home stadium for LSU, Joe Burrow’s alma mater) seats 102,321 fans. Bryant Denney Stadium, the home of the Alabama Crimson Tide, holds 101,821 southerners. Kyle Field, where Texas A&M plays its home games, can house a solid 102,733 onlookers. Arrowhead Stadium seats only 76,416. But it is a different breed of individual that walks through those turnstiles and into those seats. There aren’t many boosters there sipping on hot toddy’s with quarterzips on because the temperatures dipped below 50 degrees. These are maniacs fueled by parking lot barbecue and even more parking lot beers who bring in cardboard to stand on so their feet don’t get frostbite.

Joe Burrow probably does know a thing or two about stadium noise. I’ll give him that. But he knows nothing about Arrowhead noise in the AFC Championship game. He knows nothing about standing toe to toe with Patrick Mahomes in a playoff atmosphere. He knows nothing about how Tyreek Hill and Travis Kelce can kill you faster than you can blink in these settings. And he’s seen nothing like a Chiefs defense amped beyond recognition by a crowd of 76,000 lunatics pushing them to heights otherwise unreachable.

He’s about to experience it all for the first time on Sunday.