Chiefs Season in Review : All of the Superstitions That Failed Me in 2021 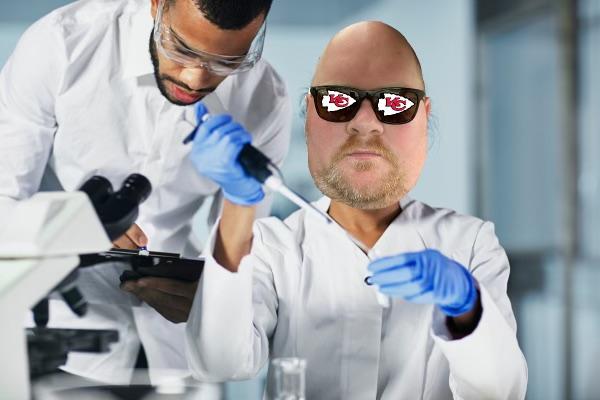 In an effort to move on from a crushing end to a confusing football season, I take a look back at my superstitions from this season – the successful, the unsuccessful, and the downright dumb.

Most people think that a good gameday outfit starts with a shirt or a hat. Something obvious that everyone sees that can be a regular part of your gameday ensemble. I, myself, have a specific hat for home games, a specific hat for road games, a go to shirt, and a go to hoodie for the colder part of the season. Those who think the gameday dress ritual starts here are not wrong, but they are also not correct. The gameday outfit starts with the first two things you put on your body – your underwear, and your socks.

As a young tike, I was around my great grandmother quite a bit. She was one of the loveliest women in the history of the planet, but she was also an incredibly superstitious person. She engrained in me all of the basics – don’t cross a black cat’s path, broken mirror is 7 years bad luck, don’t walk under ladders, etc. But there were also some that I thought were commonplace that in my adult life I’ve found were strictly something I’ve abided by for my entire life without really knowing the basis of it. Do you ever clip your fingernails on Fridays or Sundays? The answer is probably yes for 99% of the population, I’ve never done it in my life. Ever wonder why the Sacramento Kings lost to the Lakers in Game 6 of the 2002 Western Conference Finals? Mike Bibby clipped his fingernails on the bench. It was a Friday. Coincidence? This blogger thinks not. Still to this day I won’t do any of these things. If you’re behind me in traffic and a black cat crosses, sorry – I’m pulling a U-turn or turning around. Non-negotiable.

When you combine two of the most maniacal aspects of my life – superstition and my love for the Kansas City Chiefs – into a Thursday night, Sunday afternoon or evening, or Monday night tradition, the results become somewhat of a case study for borderline psychosis. The clothing is laid out the night before or in some instances the morning of. Arranged on the side of my bed so that when I walk out of the bathroom it is all right there, ready for me to put on in the same order every week. Lucky underwear first, then socks. Then we move on to the black shorts that I wear during the warmer months of the year or black joggers if we’re in the latter part of the season. A red Chiefs Nike dry fit long sleeve t-shirt (sideline gear) from 2017 that has yet to be retired. And lastly, if the weather deems it necessary, an Arrowhead Stadium flyover hoodie designed by the good folks at Charlie Hustle here in Kansas City. Home games warrant a cream-colored KC Chiefs 47 brand hat purchased in 2015, and away games now call for the same hat, but in red. I like to match the pants shade for whatever reason – remember, it’s only crazy if it doesn’t work. But the clothing choices are just the beginning. Let’s take a step by step look at how the traditions changed throughout 2021.

Game 1 : Browns at Chiefs. New year, new me. I took the liberty of purchasing a new, silver toned gameday shirt and some red gameday shorts. Great new look, right? Well, for the first week it paid off. This one I was at Arrowhead for, and while I no longer hold my season tickets, I was in a section close to my old section, drank the same lineup of pregame beverages (a cocktail to start followed by Bud Lights – strictly), and the Chiefs won a thriller. Boxes checked, moving on.

Games 2 through 4 – same outfit, same beverage choices, different results. After the Ravens Sunday Night game I took the superstitions with a grain of salt. I wore the same thing, drank the same beverages, but sat upstairs in my house. For the Chargers game – same clothes and beverages, watched at my future in-law’s house. Two consecutive losses, something must change. Let’s ditch the cocktail and stick strictly to beers for our libations. Change out the silver shirt for old faithful – the red dry fit sideline shirt and go back to the black shorts instead of the atrocious gym class red shorts. Adjustments made, victory in week 4.

Then came the Bills game. As my past mistakes hadn’t taught me anything, I again watched the game upstairs in my house. Fatal flaw. Downstairs from this point forward. This combination worked in week 6, but after the Titans loss I had to look in the mirror and do some self-evaluation. This was also around the time that I found an opportunity to write about the team for Chiefs Focus. The natural subtraction from the equation? Goodbye, Bud Lights. If I wanted to cover the team in a thorough, expansive manner and actually bring quality content to the table, it was in my best interest and the team’s best interest to cut out the dad sodas and just keep filling my hydroflask full of delicious, hydrating h2o. So began the winning streak.

From weeks 8 through week 16, the same basic clothing choices were made. Red KC heart socks from Charlie Hustle, same underwear, red sideline shirt, black shorts (joggers in the colder months), and Arrowhead flyover hoodie for the colder months as well. Red hat away, cream colored hat at home. Sat downstairs on what my fiancé and I deem the “comfy couch” (it’s the greatest sofa in the history of relaxation) for each game, outside of the Chargers Thursday night game (watched at a local establishment with extended family as we all could not get together for Christmas) and the Bengals regular season game – a screwing with such magnitude that even the most trusted rituals could not prevent. Postseason play was upon us, and the gameday traditions were alive and well.

Buffalo Divisional game – same outfit, but brought the Bud Lights back (small doses, only 3 refreshing crispy boys), and watched at my in-laws house. A risk that could have cost us the season, but in the end paid off. It was a calculated risk, however – last year during the COVID playoffs, I watched the divisional and AFC Championship in the basement of my in-law’s house as well. You better believe I sat in the exact same spot on their couch downstairs that I sat in last year when the Chiefs made their run to the Super Bowl. But what did I do for the AFC Championship game this year?

I’d like to preemptively apologize to anyone as superstitious as me, I know you’re out there somewhere. When you read the next few sentences, you will understand the level of guilt I am carrying with me still the Tuesday after the loss to the Bengals. Did I watch the game at my in-law’s house? No. Did I watch from the far-left corner of the comfy couch? Of course not. We went over to Uncle Curty’s house for a watch party. Massive garage, huge projector screen, two TV’s to the side. It’s a football fan’s dream. And while my fiancé and her family watched the 2019 run to a Super Bowl championship in that very garage, I was not in the picture yet. Shoutout to Uncle Curty for hosting everyone, and I might add the smoked sausage was again on point but hand up for breaking the traditions I had established throughout the 2021 season. I can only hope for forgiveness from the Kingdom.

Am I the only one to blame? Not exactly. I know of several direct contacts who changed up their traditions throughout the course of the season and the playoff run. My best friend, while on his honeymoon, bought a victory cigar at halftime of the Bengals game. Amateur hour. Another best friend didn’t move his bootleg Chinese Harrison Butker jersey to a different position in the room, or even put it on while the Chiefs were collapsing. Some of you probably broke tradition in an overconfident stupor because of how high the Chiefs were flying in the first half against Cincinnati.

There will inevitably be more experimenting next season as I find the correct collaboration of clothing, body placement, and refreshments to spearhead the 2022 Chiefs run at Super Bowl 57. The number should give us hope, though. It was my high school football number, and if there’s one thing I know it’s this. A group of 53 millionaires between the ages of 22 and 36 truly, deeply care about what I wear, and what my number was in high school. That’s why I keep doing what I’m doing.

When they say it’s not crazy unless it doesn’t work, they’re lying. It’s all crazy. But that is what make sports such a fun thing to attach yourself to. I love the Kansas City Chiefs, and I’ll be back next year with more quirky behaviors and decisions to try to do my universal part in pushing them back to another Super Bowl championship.

5 ways the Chiefs can beat the Bengals this Sunday

Winners and Losers from Divisional Weekend

A hobbled Patrick Mahomes led the Chiefs to its fifth straight AFC Championship game win a 27-20 victory over the Jacksonville Jaguars.

Limited edition Bobbles are out!