Potential losses for the Chiefs

What games do the Chiefs have a chance to lose?

As sports fans, regardless of sport, we never want to see our team lose, but considering only four times in the NFL’s 103-year history a team has finished the regular season undefeated and without ties, that’s not realistic. So what games do the Chiefs have a chance to lose this season? I’m not going to look at upsets like the game against the Seahawks or Texans where the Chiefs will be heavily favored but games that will be a little closer. I’ll be going in order on the schedule, not the likelihood of a loss.

The first potential loss has to be in week 4 on the road against the Buccaneers (I feel confident the Chiefs will beat the Chargers in week 2). Any time you’re playing Tom Brady, it’s going to be a tough game, even when he’s going through stuff in his personal life like he is now. I don’t think the Chiefs will lose this game, to be honest, but it is definitely one I won’t be surprised if they do lose.

The Chiefs/Bills is quickly becoming a rivalry, which is ironic because one of my best friends is a Bills fan. Josh Allen and the Bills will come to Arrowhead in week 6. This team dominated the Chiefs at home last season in the regular season and gave Patrick Mahomes one of only 3 double-digit losses in his career (including the playoffs). This is a game that could go either way. We should definitely be prepared for this game to be the first loss, but as of right now, I’m predicting the Chiefs to win in another epic game in this budding rivalry. The last time the Chiefs played the 49ers in a meaningful game, it ended with Chiefs Kingdom celebrating our first Super Bowl victory in 50 years. The Chiefs will travel to Santa Clara, California in week 7 to play them again, though with less on the line this time. The 49ers are a potential playoff team again. I’ve actually seen a couple of people predict a Super Bowl LIV rematch this year. Any time you’re traveling to the east or west coast, even for a team in the midwest like the Chiefs, it’s a challenge because it’s a longer trip. The key for the 49ers will be how well Trey Lance does for the team. This is similar to the Bucs game where I don’t necessarily think the Chiefs will lose, but I will not be surprised if they do.

We’ve heard the noise all off-season about the Chargers and how they’re going to end the Chiefs division title streak. While this is frustrating for us Chiefs fans, it’s not impossible. I don’t think it will happen but there is a chance of it happening. I do think the Chiefs will win at home, but when the Chiefs make the trip to SoFi Stadium in week 11, this is the game we have a good shot at losing. Sweeping a team like the Chargers will be difficult, but this game could go either way. For now, I am predicting the Chiefs do lose this game. 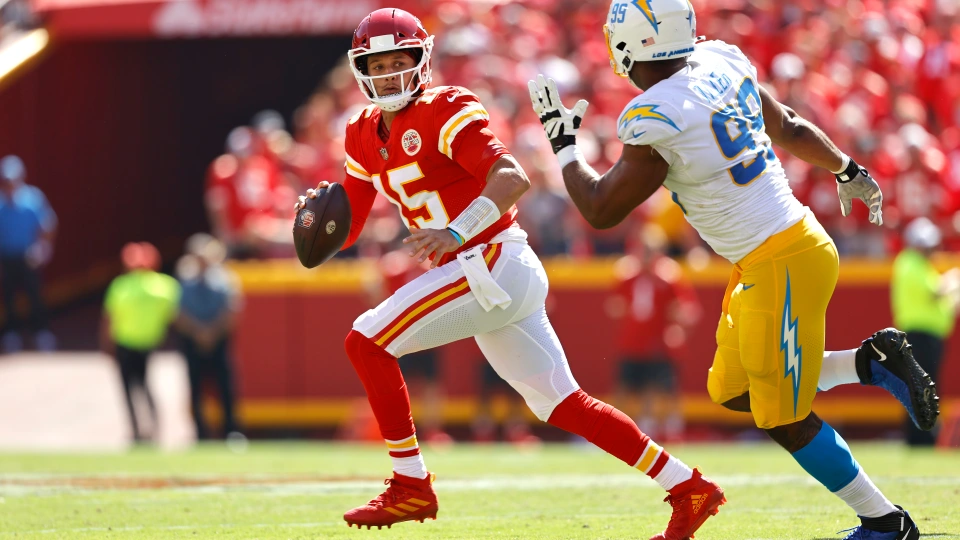 You might have expected to see the defending champs next. Until they got dominated by the Bills on opening night, I would have included them, but not anymore. Next, I have the Chiefs visit to the Queen City to play the defending AFC Champion Bengals. Every quarterback has his kryptonite. For Brady, it’s the Dolphins, for Peyton Manning, it was the Patriots, it happens. Are the Bengals Patrick Mahomes kryptonite? Or at least Joe Burrow? Mahomes is 1-2 against the Bengals and 0-2 against Burrow. The Chiefs very well may exercise some demons from their two losses to the Bengals last year, but I’d be lying if I didn’t think they had a chance to lose this game. I am predicting the Chiefs win this game, but it might be a loss too. 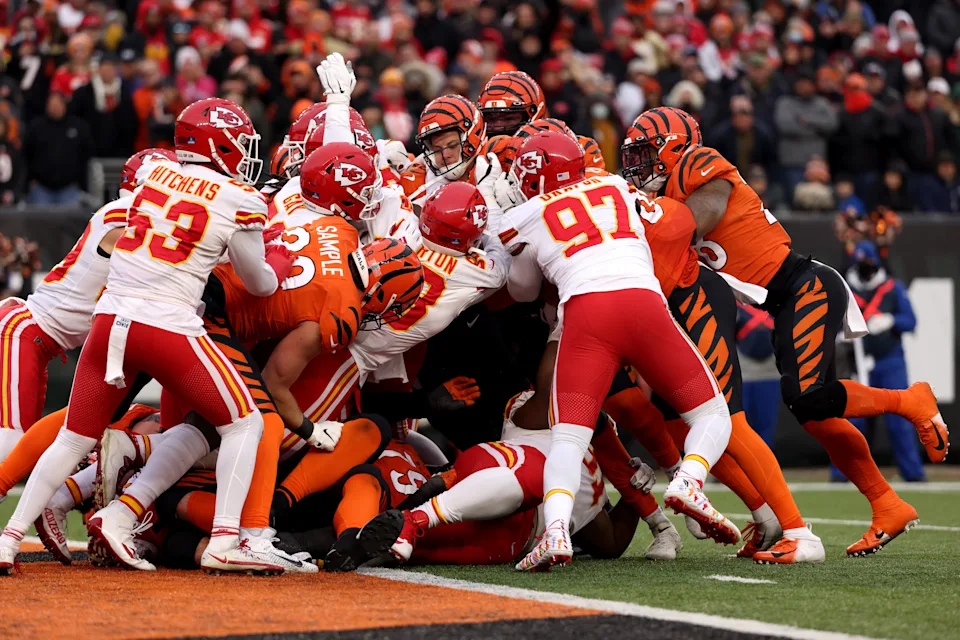 The Chiefs haven’t lost to the Broncos since Peyton Manning’s final year in the NFL. The Chiefs have also won those games by an average point margin of 11.5. However, the Broncos don’t have starting quarterbacks that should have been a backup anymore. They’ve got a superstar quarterback for the first time in 7 years. Russell Wilson won his first and only game against Patrick Mahomes when he was with the Seahawks in 2018. The Broncos last year were a quarterback away from being a good team, and now they have it. If the Chiefs don’t lose to the Bengals and/or the Chargers, our winning streak over the Broncos very well may come to an end. I am predicting the Chiefs win this game, however.

The final potential loss (I think the Chiefs will win big against the Broncos in Arrowhead regardless of what happens in Denver) I have for the Chiefs is their week 18 regular-season finale against the Raiders. The Raiders made a couple of good additions in the offseason and should have a decent team. In my previous article though, I called them overhyped. Despite that, this game is still a potential loss. It’s a rivalry game and it does appear the days of the Chiefs sweeping the Raiders every year is behind us. I do think the Chiefs will win this game, but this game is another one that I won’t be surprised if the Chiefs lose. I’m leaning toward the Chiefs winning because the Chiefs might be playing for the division in week 18 and potentially a first-round bye. 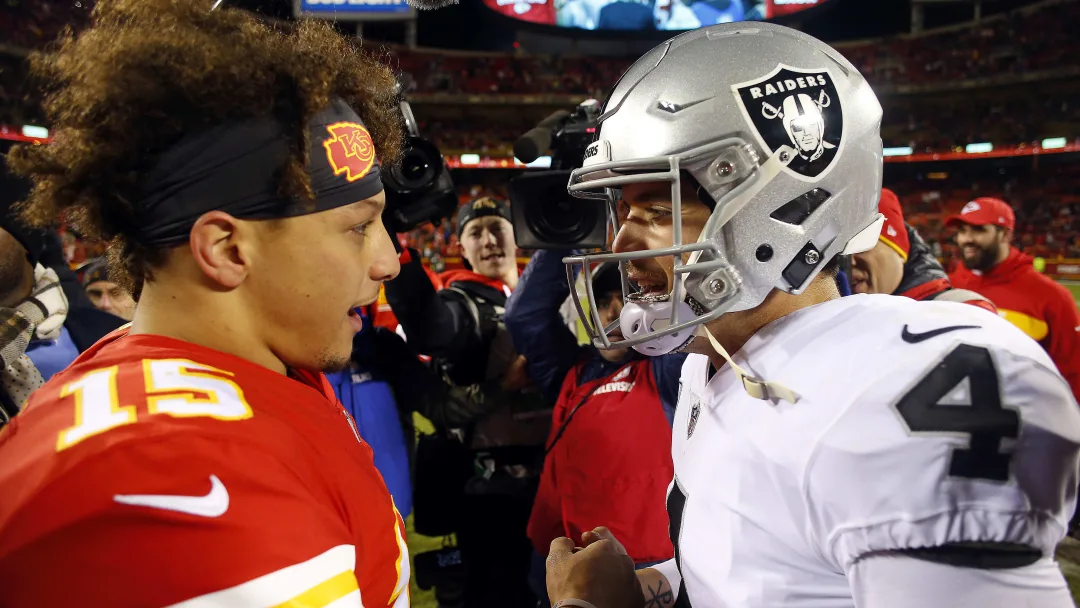 We all know the old saying that was turned into a title of a football movie, any given Sunday. We could get upset by the Texans. We could beat the Bills by 40 points. You just never know with the NFL and that’s what makes it exciting. These eight games are all games the Chiefs may lose. I don’t think they will lose all eight, however. Football season is here finally!