Bold predictions for the rest of the season

Before the season I did a bold predictions article. Only one has been proven wrong (Seahawks being the number selection, don’t think that is realistically possible now), several could still go either way, and two have been right so far. I predicted the Raiders would lose more games than they win. Well, they’re 2-5 at most 8 losses and at least 5 which puts them right there. The other prediction that seems to be right so far is Justin Herbert only taking a minor step forward. He’s averaging a career-low yard per game and is on pace for a career-low in touchdowns and also a career-low in interceptions. But what about bold predictions for this season?

I am predicting only half of the current division leaders will win their division. These teams are the Bills, Chiefs, Titans, and Buccaneers. These four teams are the only ones that are the clear-cut best team in their division. I don’t think the Eagles win the NFC East. In the end, I think the Cowboys or Giants win that division. The Eagles still have to play the Cowboys again and the Giants twice, as well as the Colts and Titans. The Seahawks, who are currently leading the AFC West, will miss the playoffs. Yes, the Seahawks have played well behind a surprisingly good performance from Geno Smith, but they’ve also had an easy schedule so far. They’ve played the easiest schedule in the league so far and have the most challenging schedule to finish the season, including 7 games against potential playoff teams. 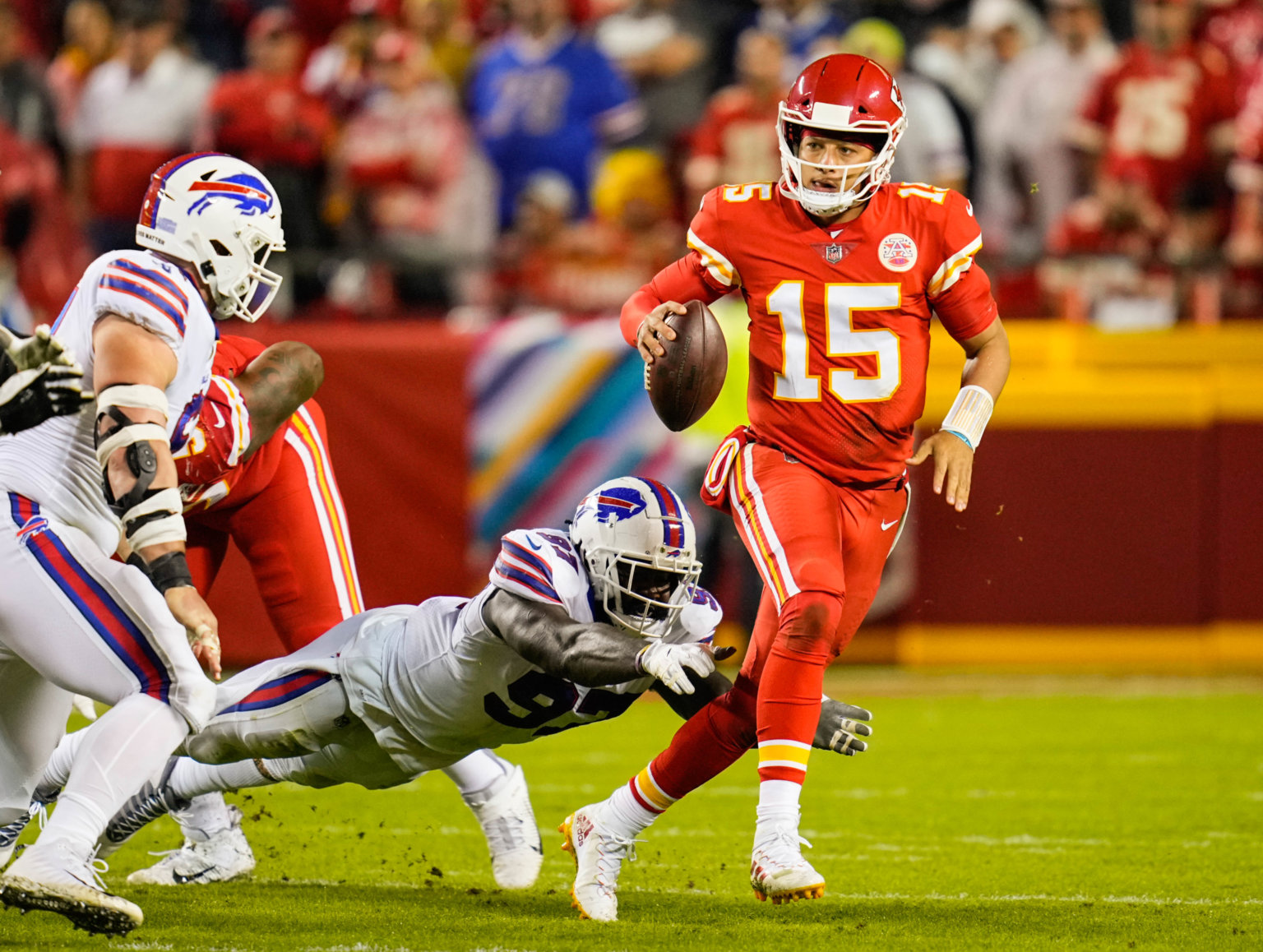 I believe that only one of the current teams sitting in a wildcard spot (as of the conclusion of week 7) will miss the playoffs. I believe that team is the Dolphins. The Dolphins don’t necessarily have a tough schedule remaining, but due to tiebreakers and other teams’ strength of schedule, they’ll just barely miss it.

While Josh Allen at the moment appears to be the clear-cut favorite for MVP, I think we will see someone who is a dark horse candidate for MVP, as of me writing this article, finish high in the voting, probably 2nd or 3rd. The players I think are most likely to be in the running include Joe Burrow, Jalen Hurts, or Tua Tagovailoa. Tua did miss a couple of games because of his concussion and that may keep him out and Jalen Hurts doesn’t have very many passing touchdowns so they’re less likely for this to happen but it’s possible. Burrow definitely is though. Since the Bengals started 0-2, he’s 4-3 and is averaging 272.8 yards per game, has 12 touchdowns to 1 interception, and a quarterback rating of 112.7. If he continues this pace he should be a candidate for MVP by the end of the season.

There are two first-year head coaches whose teams are struggling. Nathaniel Hackett, the Broncos’ head coach, is 2-5 despite having a quarterback who has the 6th most career passing yards among active quarterbacks and a defense that is statistically one of the best in the NFL. However, because they have only scored 100 points in 7 games played, they are struggling. For comparison, the Chiefs (the highest-scoring team in the NFL) have scored 98 points in their last 3 games alone. A lot of Broncos fans are calling for him to be fired, including a friend of mine. The Raiders are also struggling with a 2-5 record as well. The Davante Adams addition hasn’t been as lucrative as people thought it was going to be. Honestly, I’m confused why they didn’t keep Rich Bisaccia as head coach, who went 7-5 after Gruden resigned and led them to the playoffs where they almost beat the team that would go on to win the AFC Championship. My point though, one of them is going to be fired at the end of the season. Hackett is, in my opinion, the one who is most likely to be fired. Another bold prediction I have for the Broncos is they finish with only 5 wins, which would be the lowest in Russell Wilson’s career and only his 2nd losing season.

The Patriots have struggled so far this season. They are in last place in the AFC East at 3-4. The Patriots’ remaining opponents have a combined record of 41-24-1, the best in the NFL. So you take a struggling team with the most difficult remaining schedule in the NFL, it’s a recipe for a bad season. I have two bold predictions related to this team. First off, I think Belichick retires. He’s 70 years old and he’s consistently coached for 48 seasons, the 2nd longest continuously employed coach in the NFL right now. Considering his team is struggling, he may decide to hang it up before his legacy is tarnished with a struggling team. Next, he wins the fewest games he’s won in a season in his career as he finishes with a 4-13 record. Yes, that means the Patriots finish the season 1-9 in their remaining 10 games and it means they finish 0-6 in the division, but that’s going to happen in a division that has 3 potential playoff teams. 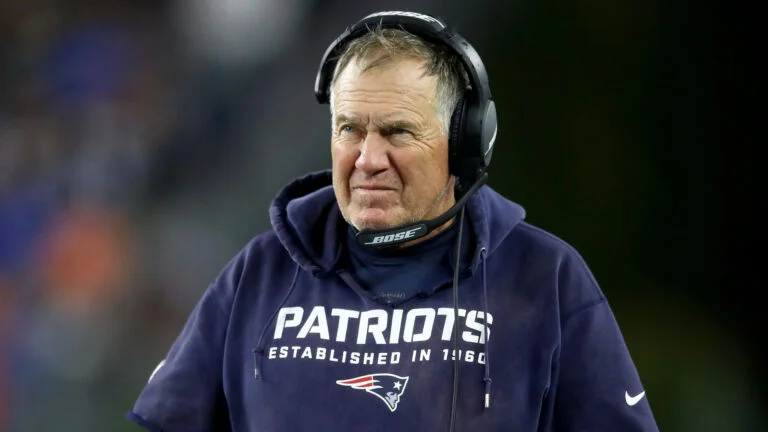 Tom Brady isn’t having a terrible season, but for Tom Brady, it’s a bad season. Not to mention, he has almost no arm strength left. Most of his completions are short yardage. His yards per attempt is the 3rd lowest of his career and his quarterback rating is one of the worst he’s had in recent years and the worst he’s had since joining the Buccaneers. Now, this could be because he’s going through a divorce, which I get. Not a big fan of his but I know it hurt him to get a divorce, especially knowing how hard that will be on the children he had with his now ex-wife. However, it doesn’t change that he’s struggling and so are the Bucs. The Bucs will sneak into the playoffs at 9-8 though. Another superstar quarterback, won’t be so lucky. Aaron Rodgers is struggling as well. He entered the season tied for the 2nd best quarterback rating (minimum 1,500 attempts) behind Patrick Mahomes. After recording the 3rd worst quarterback rating of his career (so far at least) he dropped to 3rd. He’s also got the lowest yards per attempt of his career and is on pace for the lowest passing yards in his career for a full season. The Packers do not look good. I think they finish 5-12. Because of Brady and Rodgers’ struggles, I think they both retire at the end of the season. Bold predictions are just that, bold. Doesn’t mean they will all come true just means they are possible. We’ll see how accurate they are come the end of the season.