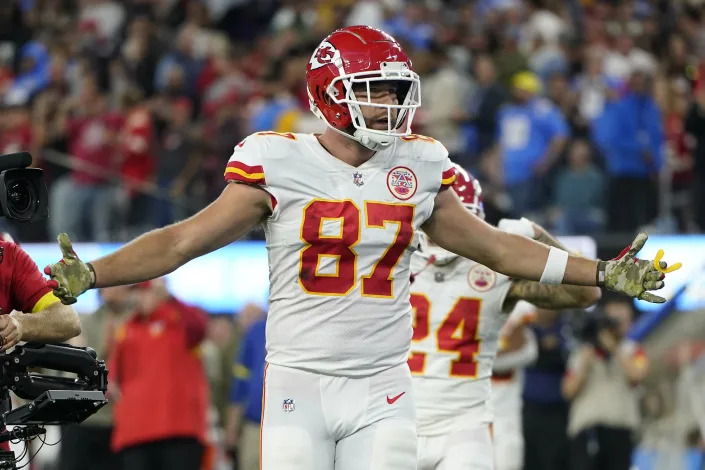 The Kansas City Chiefs are just that good, especially when it comes to primetime games. The Chiefs continue on their win streak by beating their AFC West rivals, the Los Angeles Chargers, 30-27. The team played team ball again after trailing 20-13 in the first half, outscoring the Chargers 17-7 in the second half.

The change in momentum came after dealing with some bad missed calls again, that included Chargers right tackle Trey Pipkins to hold Chiefs pass-rusher Mike Danna in the chokehold like Ving Rhames did to Tyrese Gibson in Baby Boy. The Chiefs are 8-2 and this win not only keeps the Chiefs the top undisputed team of the AFC West, but continues to have them as the No. 1 seed in the AFC playoff picture.

There were players that stood out especially with the snaps played and the significance of their reps. I will list the winners and losers of Week 11 for the Chiefs.

Patrick Mahomes once again shows why he’s the NFL’s modern day Michael Jordan. With just over 90 seconds to play in the 4th quarter and his team down by 4 points, the MVP-front-running quarterback constructed a 75-yard touchdown drive that resulted in a 17-yard catch and score by tight end Travis Kelce. This final touchdown gave the Chiefs the 30-27 win over the Chargers in Los Angeles.

Two straight seasons in a row, Mahomes to Kelce for a game-winning score against the Chargers. Even after the Chargers seemed to deliver a death blow of their own as Justin Herbert took the Chargers offense 64 yards down the field to recapture their lead with under two minutes to play. As has proven to be the case throughout Mahomes’ career, however, you can’t leave him any time on the clock or you risk falling victim to a last-second loss.

Mahomes finished with 329 passing yards and 3 touchdowns, all of which went to Travis Kelce. The future Hall of Fame tight end was also on the receiving end of 6 of Mahomes completions for 115 yards.

Meanwhile, there has been little discussion over the fact that the Chiefs won without Mecole Hardman and JuJu Smith-Schuster. Not to mention, Kadarius Toney and Clyde Edwards-Helaire left very early in the game. Travis Kelce continued to be an elite outlet for Mahomes, particularly when they were in striking distance of the end zone.

In the fourth quarter alone, Kelce’s two receptions went for a combined 49 yards and each were touchdowns that gave the Chiefs the lead. All I have to say is, Travis Kelce is the Chargers’ biggest kryptonite. Kelce in his first 10 career games against the Chargers when they were in San Diego had 0 receiving touchdowns. But, since the Chargers moved north and into SoFi Stadium in 2020? He has 7 touchdowns, 6 of them to tie games or take the lead.

Last year, he scored a touchdown to force OT against the Chargers, then scored a monster 34-yard walk-off game-winner. Sunday night he essentially did the same thing. MVPat and Zeus strikes again and I think Kelce should be an Offensive Player of the Year candidate. Kelce now leads the NFL in receiving touchdowns with 11; he’s hoping to be the first tight end to lead the NFL in that category since 2013. Don’t forget, Kelce also has the most 100 yard games among tight ends in NFL history.

Rookie running back Isiah Pacheco rushed the ball 15 times for 107 total yards in Sunday’s 30-27 win over the Chargers. Pacheco led the Chiefs’ rushing attack for the second straight week and became the first 100-yard rusher for the Chiefs since Week 4 of last season.

Clyde Edwards-Helaire (ankle) went down before halftime and did not return. But, he was already being phased out of the offensive game plan due to inconsistent play. Jerick McKinnon remained involved with 7 touches for 24 yards, but he lost a fumble late in the fourth quarter that nearly cost the Chiefs the game.

Pacheco is looking more and more like the clear lead back on a potent offense. If he can continue to be that much of a factor on the ground, that should make the Chiefs even more dangerous than they already were.

As mentioned before, Kansas City’s skill players were very limited. The team’s injury misfortune opened up an opportunity for rookie Skyy Moore and journeymen Justin Watson to put their skills on display.

The rookie Moore did just that, setting new career highs in receptions (5) and receiving yards (63). He quietly surprised in his last performance by catching three of 4 of his targets for 67 yards.

Aside from Travis Kelce, Watson was also one of the most productive wide receivers on the Chiefs’ offense on Sunday Night Football. He caught 3 passes for 67 yards. He also got involved as a great blocker.

It is currently unclear if the receiver room will get any healthier next week, so the 22-year-old Moore could find himself starting opposite Marquez Valdes-Scantling against the Rams next Sunday. If that scenario were to unfold, Moore could be a sneaky play in Week 12, especially if Rams cornerback Jalen Ramsey is tasked with covering the more-proven MVS.

4. The Defense led by Nick Bolton and Chris Jones

You have to give Spagnuolo his credit making the second half adjustments that they needed in order to win this game. The Chiefs were outscored 20-13 in the first half. They allowed just 7 points in the second half leading to the offense putting up 17 points. Once again, he’s doing a hell of a job in putting his players in the best position to win in the most pivotal moments.

Sack Nation for the third straight week dominated, sacking Hebert 5 times like they did Trevor Lawrence last week. They took advantage of the Chargers offensive line woes with Chris Jones leading the way which opened up for Mike Danna to have 2 sacks in the game. Chris Jones’ clutch sack of Los Angeles Chargers quarterback Justin Herbert shrunk the Chargers’ late-game comeback hopes.

The great pass rush led to Bolton having one of his best games this season. In addition to grabbing the game-sealing pick, Bolton flew to ball carriers and racked up double-digit tackles. He didn’t miss one of his 13 tackle attempts and was the first defender to contact on 10 of those.

Jerick McKinnon is still a really valuable player for the Chiefs; In fact, his pass protection was actually an offensive key in this game. However, in critical situations like last night, you have to keep your composure in the heat of the moment. In McKinnon’s case it resulted in the fumble that set up the Chargers’ drive to take the lead late in the fourth quarter with about 90 seconds left to go. Without the fumble, the Chiefs could have put the game away with a score. But it led MVPat to put on his cape once again. He will bounce back because again he is very valuable and he will be fine.

In July, I listed Los Angeles Chargers head coach Brandon Staley on the hot seat in the AFC West. Last night shows why?! The Chargers have faced adversity this season in more ways than one, and after dropping back-to-back primetime games, they’re up against it yet again. Now 10 games in the books, the Chargers hold a 5-5 record. Their last two games, against the 49ers and Chiefs, have come to abrupt endings with the opposition forcing a turnover to seal it as the Chargers looked to string together game-winning drives with the clock ticking down.

That is on the responsibility on a coach desperate to win a game that he’s willing to risk the health of his star players like Mike Williams and Keenan Allen all just to lose to the Chiefs. The Chargers spent more money this offseason than any other year under general manager Tom Telesco. Yet, as the season approaches Week 12, the division is wrapped up for the Chiefs taking.

3. The Media Folks that choose the Chiefs to finish 3rd in the West

That’s right, we didn’t forget and we’ve got the receipts. We will keep their names out of this, but most sports fans know. If you think making your season picks before the season saying the Chiefs will either finish 3rd or last in the AFC West was going to motivate us? I want to say thank you and stay in your lane next time. We don’t need any more bandwagon fans. This is not the same team that started 3-4 last season and then went to the AFC title game against the Bengals.

This is a balanced football team that is executing on all cylinders with the best coach and best players in the NFL. With 7 games left to play, the Chiefs have all but locked up its seventh straight division title. In a year where every other team loaded up with big-name veterans like Davante Adams, Chandler Jones, Khalil Mack and J.C. Jackson, the Chiefs went young by trading away Tyreek Hill who is currently on a record breaking season. That moneyball move is paying off very well. A majority of the media said the AFC West was the toughest division in football. But with just 7 games to go, give it a rest.