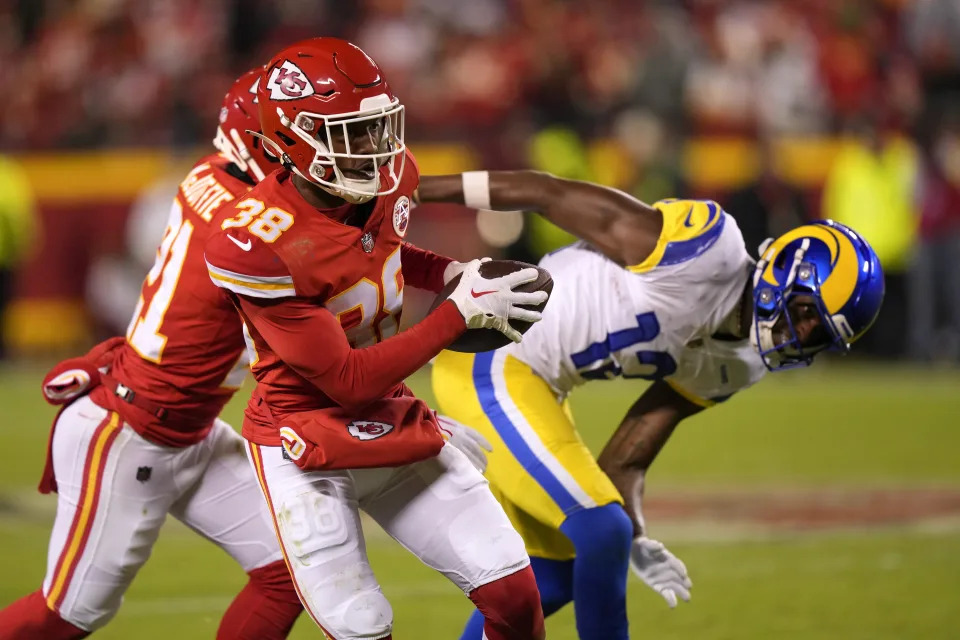 The Kansas City Chiefs continue their win streak (5) by defeating the defending Super Bowl Champion Los Angeles Rams 26-10. The Chiefs are 9-2 and have won 6 of the last 7 against Los Angeles. They exacted a measure of revenge for that lone defeat, when then-Rams QB Jared Goff threw a late TD pass to win that 54-51 Monday Night thriller in November 2018. The team remains no. 1 in the AFC and the best still in the AFC West. Now the team focuses on their rematch with the Bengals next week.

There were players that stood out especially with the snaps played and the significance of their reps. I will list the winners and losers of Week 12 for the Chiefs.

Patrick Mahomes does it again. Patrick Mahomes’ lone touchdown pass in the 26-10 win went to his favorite target, tight end Travis Kelce, setting a new franchise record. Not only did the touchdown give the Chiefs the lead, it marked the 46th time that Mahomes has found Kelce for a score, tying the mark left by the Len Dawson and his wide receiver Otis Taylor.

The 46 touchdown passes are also five more than Mahomes had to former Chiefs wide receiver Tyreek Hill (41). Kelce now has 12 touchdowns on the season, which also passes his career best of 11, with 6 games remaining in the regular season. Mahomes was 27-for-43 in the win, throwing for 230 yards including 1 touchdown and 1 interception.

It was his 8th interception of the season, and his 29th passing touchdown. Mahomes has thrown for over 3,500 yards this year, and has not had a game with under 300 passing yards since October 10. Now MVPat wants his revenge come this Sunday.

For the second time in a row, the rookie running back Isiah Pacheco is on this list of winners. After rushing the ball 15 times for 107 total yards in Last Sunday’s 30-27 win over the Los Angeles Chargers. Pacheco led the Chiefs’ rushing attack for the third straight week, rushing the ball 22 times for 69 yards and a touchdown in Sunday’s 26-10 win over the Rams.

He also caught his only target for 17 yards. Pacheco saw his yards per carry regress but made up for it by getting into the end zone for the first time since Week 1. The rookie running back has 258 rushing yards over that three-game stretch, and he figures to see plenty of work again in Week 13 against the Bengals.

I could’ve put the defense as a whole as a winner because they played their best game of the season. There was one player that stood out over Chris Jones’ sack, Nick Bolton and Frank Clark’s play and George Karlaftis getting his sack. That player was slot cornerback L’Jarius Sneed.

Sneed took a blow to the head earlier in the game and was tended to on the field before walking under his own power into the medical tent. He later came back and helped his team finish the game. Sneed allowed just 3 catches for 9 yards while intercepting the other target to finish with a 92.4 coverage grade according to PFF.

Chris Jones is the Chiefs best defensive player but, this defense has been so good since inside linebacker Nick Bolton was drafted last season. The second-year man finished the win with 11 tackles against Los Angeles, with one of those being for a loss. Additionally, he had a pass broken up and an interception in the 4th quarter.

After the game, head coach Andy Reid praised Bolton’s outing and used a very important designation in the process: an All-Pro season. Bolton and L’Jarius Sneed are stalwarts on this defense.  Sneed may be the best cover slot corner in the league right now.  His knack for diagnosing plays and his range will allow Spagnuolo to bring strong safety Justin Reid closer to the line of scrimmage to take away the short passes to the tight end.

Bolton is a tackling machine, and he can thank Jones for most of them. When the big defensive lineman occupies two or three blockers a play, allowing Bolton the freedom to run free and make tackles.  If Jones is single blocked, he will make the play.

Week 12 Loser (There’s only one loser this week)

Chiefs kicker Harrison Butker has done a great job in making his kicks. However, special teams might not be important in other folks eyes, but it’s just as important as the offense and defense doing their job. I know Dave Toub is a great coach and I understand that things aren’t going to be perfect. It’s how you respond to adversity.

Kansas City shouldn’t be going into week 13, especially with an important one coming up, and still trying to figure out who is going to be the Chiefs lead return specialist. Special teams has been inconsistent week in and week out for the Chiefs this season.

One, why keep going to Skyy Moore at punt returner despite his problems. Then, being unprepared for everything that opposing special teams units throw at them every week like the Jaguars opening kickoff and now this fake punt by the Rams. If we can’t figure this problem out, the special teams unit could be the reason this team leaves early in the playoffs.

However, Reid and Co will very likely get this resolved soon.