It’s time in our series to fix the Chiefs special teams to break down their kick return unit. Let’s dive into it.

The Chiefs have experienced different issues throughout the season, especially regarding the Special Teams unit. There have been different excuses each time. However, unfortunately the issue in 2022 has seemingly gotten worse this year.

In 10 seasons under Special teams coordinator Dave Toub, the Chiefs special teams units have led the league is several categories including kickoff return average, punt return average including touchdowns. Since 2017 under Toub, Harrison Butker has the 3rd highest FG percentage in NFL History (88.6).

Unfortunately, Toub hasn’t been quite the special teams expert the team knows him to be and his units have actually gotten worse in 2022. Rather muffed punts, missed field goals, bad holds, fake punts, and unprepared on-side kicks, these issues could haunt the Chiefs in January in the playoffs.

The Chiefs know it’s an issue and are desperately working to solve it. Let us be of some help and suggest three solutions before a mishap costs the Chiefs in a big way. This is Part 2 focusing mainly on the kickoff return unit.

Solution #2 is on Kickoff Returns…

Make sure everyone knows their assignments (Blocking and positioning) so Pacheco can break for one: 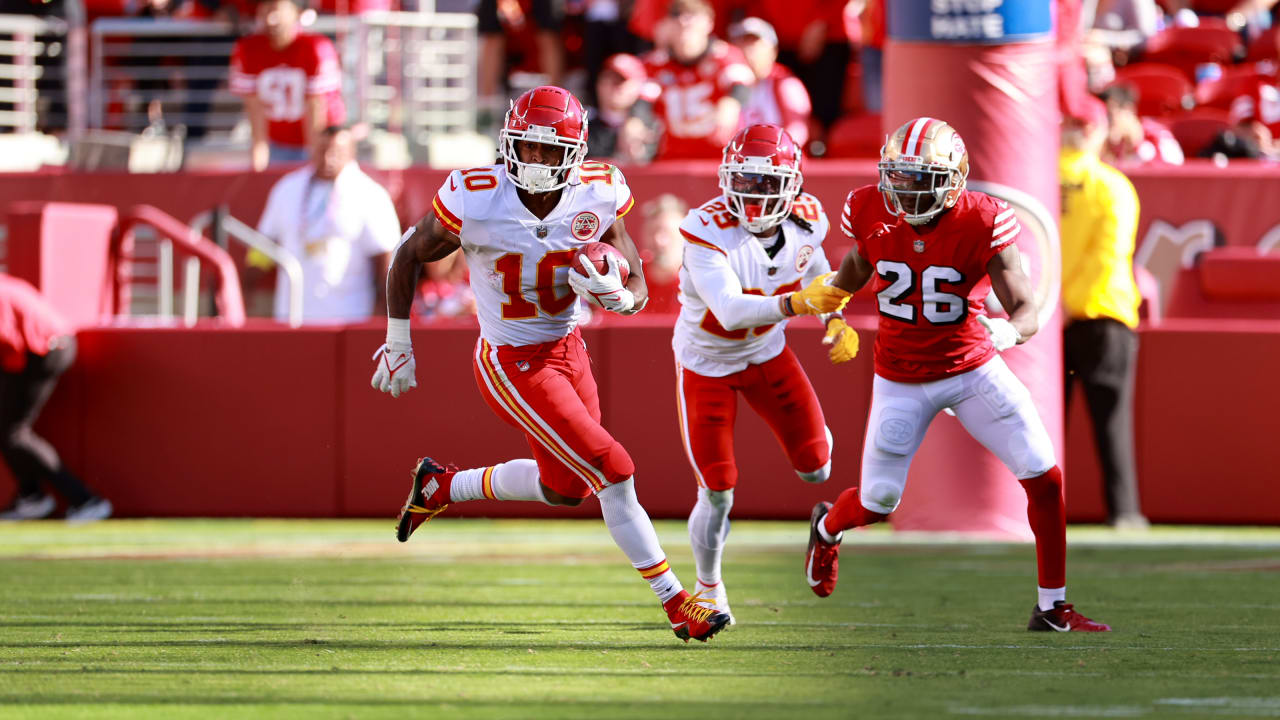 Isiah Pacheco is the Chiefs’s leading kick returner with 597 yards with the 6th most in the NFL among kick returners. Pacheco’s role on the Chiefs’ offense has increased as he has gained more confidence as the lead back — over the last nine weeks, Pacheco has earned 695 yards and 3 touchdowns on 134 touches, or 5.2 yards per touch.

Perhaps that success on offense has helped his kick return game as well. I still think just like the punt return unit, the kickoff return isn’t really a problem but they can make some adjustments that could lead to Pacheco breaking off a big one before his rookie season ends. Pacheco hasn’t always received the best blocking on kick returns this season but it was solid in Week 13, especially from fellow running back Jerick McKinnon who has been the Chiefs’ best blocker on kick returns in 2022.

McKinnon brought that same energy from offense when he blocks for Mahomes in Pass Pro during Pacheco’s 44-yard kickoff return. If not for McKinnon keeping his man at bay, Pacheco might not have been able to round the corner enough to bust such a big return in that game. Also I noticed on that play if you watch on the Chiefs Wire film review, Jaylen Watson is 40 yards away from Pacheco with Jody Fortson (now on IR) and Michael Burton as his main blockers.

Next return against the opposing teams’ 5×5 Kickoff Alignment, The Chiefs should at least have rookie cornerback Jaylen Watson drop about 10-15 yards (instead of lining up at 40 yard line, line up at the 30 or 20) so that will give them enough time to build the kickoff return wall with Burton and whoever replaces Fortson’s role. If not, (if he’s lined up at the 40 yard line) then he should run back and then flip his hips when he gets to the 30 yard line.

Watson is the top man in the diamond formation on the kickoff return. In Week 13, on that Pacheco return, Watson turned his hips early. He wasn’t the only one. I also saw Chiefs rookie safeties Nazeeh Johnson and Bryan Cook flip their hips early before setting up the wall. I understand that they are rookies but they to understand their roles on kickoff return. On the Pacheco return, you clearly see the Chiefs position five men near the line of scrimmage at the 50 yard line, then three men at the 40 yard line and then three men including the primary kick returner is back there.

It worked when we got 44 yards on that play. However, I believe Chiefs can do better not only by positioning seven men near the line of scrimmage, and four men behind their own 20-yard line (or in Watson’s case the 40-yard line or who plays the middle role) in a diamond formation.

After the kickoff, the Chiefs strategy should become clear: Set up the blocking wall for Pacheco. The Chiefs can initially choose to ignore the players known in kickoff coverage terminology as L5 and R5 (On a typical coverage unit, R5 and L5 are the gunners where their job is to run straight to the ball), who are unblocked down the middle of the field. An example of that reason could be that their return is intended to go up the left or right sideline. Rather than wasting resources on players who are not at the focal point of the play, we should choose to send our blockers to any side of the play.

If it’s against a 5×5 (five men on the opposite side each where the kicker is in between the players), they have to start with seven men near the 50-yard line, and a diamond formation deep in their own territory for the remaining four players. Watson like in Week 13 part of that diamond should either be lined up at 20 (unless the rule has changed on that) or if he’s at the 40-yard line, he should know his assignment by sprinting back 10 yards then flip his hips as if he was running the DB gauntlet drill at the NFL combine when he gets to the 30-yard line smoothly.

Chiefs tight end Noah Gray (#83) is the third man from the right along the 50-yard line. He should either immediately pinch up and attempt a quick jam on the opposing team’s R3 (R3’s role is staying in his lane, but as he is running down the field in his lane, their job is to keep their eye on the ball, to see where the kick has gone and which direction the returner is going).

The opposing player might do exactly what is taught, immediately altering his route butt-side of Gray, avoiding the block and quickly returning to his lane. In order for Gray to have a success rep, he must block hard and not let R3 altering his route (study their kickoff coverage playbook on film). There have been special team players who have been released as a result of plays like this.

The other two Chiefs on the right side should drop back towards their own end zone. At the same time, the diamond should begins to consolidate. Like in Week 13, Jody Fortson (#88) and Jaylen Watson (#35) drift towards the right hash mark, while Michael Burton (#45) heads towards the left hash mark. Meanwhile, Isiah Pacheco (#10) waits for the ball. Now that Fortson is on IR, I could see Blake Bell getting that opportunity and I feel as a veteran that should explain the diamond formation to the younger players so they understand why its’s important for the returner.

As that play continues, there should be six Chiefs retreating towards their own end zone. Bell and Watson, should be next to each other at the right hash mark in the diamond formation. Burton should be seven yards in front of Isiah Pacheco. The opposing team’s R3 might loop behind Noah Gray, who can’t be completely whiffed on his block. This will be the one mistake the Chiefs make on this play. No mistakes at all.

When Pacheco receives the ball a yard deep in his own end zone, Bell and Watson should work strongly back to the left or right side of the field to take on L5 and R5 and seal them off. At the same time, the two Chiefs who had initially retreated from the 50-yard line (on the right side of the screen when you see the video) should work over to seal off the R4 and R3, those roles are for Nazeeh Johsnon (#13) and special teams ace Chris Lammons (#29).

These four blocks are critical to this play. The kickoff coverage on the left side of the field could be too far away to play a meaningful role in tracking down Pacheco, but the four targeted by these blocks (L5, R5, R4 and R3) all might have a chance to make a tackle. Execution on every one of these blocks is crucial for enabling a long return.

As this occurs, Isiah Pacheco should begin to bring the ball out of the end zone, led by Burton. Most of the Chiefs should be attempting to seal off players in the center of the field. However, Burton main role is tasked with clearing the path directly in front of Pacheco. Burton should head slightly upfield before altering his path and heading to the right or left (whichever provides the clear opening).

Behind him, Pacheco can mimic his route (just like that big 42 yard return against the 49ers in Week 7). Pacheco because of his Knile Davis like speed and power should target the R2 (or L2) with his block, as he is the nearest free man on the right (or left) side of the field.

The Chiefs by that time should have destroyed the opposing defenders in the middle of the field. Although Watson’s man might be running free at that point, he could be far behind the play that he has no chance of catching the 4.37 speedster Pacheco. Bell and two other Chiefs should still be locked up with other coverage defenders, preventing them from getting outside to make the tackle on Pacheco. It should be on the outside that Kansas City’s blocking should really shine. We should see perfect blocks by Burton, Bryan Cook (#6), and Noah Gray.

Whenever watching a game, take a minute to look at the positioning of these blockers on kickoff return by the Chiefs. The angles should be exquisite every time. The technique has to be phenomenal every time. The timing needs to be outstanding all the time. The execution on the blocks that create that wall should be used as teaching material for NFL special teams coaches for years to come. Pacheco should see the gaping hole created by his teammates and sprint through it, leaving him one-on-one with the kicker.

Some people think the Chiefs kickoff return unit should already be the best in the league but for Dave Toub, he brought in new players learning a new scheme. It can be a challenge and the team has faced its fare share of challenges but we are 13-3 going into the playoffs. But while our offense and defense is taking care of the issues before the postseason begins, Toub’s special teams should provide a tremendous special teams unit that stands out before the 2022 season ends.

Our fans may think we lack the flash and flare of other kick returns when he had Dante Hall and Tamarick Vanover or Tyreek Hill and Mecole Hardman, but if we just bring absolute brilliant execution of a well-designed play especially on kickoff return, Toub will remind others that he is still one of the best special team mavens in the NFL. Timing is often overlooked on kickoff returns, but is a critical aspect. Holes may only be open for a fraction of a second due to the speeds involved.

Like the 106-yard return by Knile Davis (#34) against the Texans in the 2015-16 NFL Wild Card Playoff game, the Chiefs timed their blocks with outstanding precision, syncing up with Davis beautifully. Against a 6×4 (six men one side, four on the other) both R2 and R5 are sealed outside by our deep blockers, providing a narrow crease for Davis to break for one. The Chiefs need to do the same thing for Pacheco. In my last part of the solutions to fix the Chiefs special teams before the playoffs is the helping out the Punt return unit.