Looking At Some Of The Chiefs Biggest Playoff Games.

The Kansas City Chiefs have been involved in some of the greatest playoff games in NFL history. In honor of their quest to win a second Super Bowl, let’s take a trip down memory lane and re-live their biggest postseason wins.

Last January, one of the best playoff games in NFL history occurred in the AFC Divisional Round between the Buffalo Bills and Kansas City Chiefs. This game is most remembered for the final two minutes of regulation, particularly the final 13 seconds.

The two teams combined for 25 points starting with an improbable 27 yard touchdown pass from Josh Allen to Gabe Davis on 4th and 13th to give the Bills the lead, 29-26. It took all of 52 seconds and five plays for the Chiefs to re-claim the lead, capped off by a 64 yard touchdown reception from wide receiver Tyreek Hill. With a minute left, the Bills answered with a touchdown of their own to go up 36-33. They seemingly had the game won with 13 seconds remaining…

With two plays, the Chiefs immediately got into field goal range and Harrison Butker made a 49 yard field goal. Just like that, the game was going to OT, tied at 36.

In overtime, Mahomes masterfully lead an eight play, 75 yard drive capped off by an eight yard touchdown pass from Mahomes to tight end Travis Kelce. It was the most appropriate ending to a wild game. The Chiefs would come out victorious 42-36.

Mahomes finished with 378 yards and three touchdowns while Josh Allen threw for 329 and four touchdowns. However, there was another AFC Divisional Round game Chiefs fans might remember from a few years back.

In the 2019 season, the Chiefs steamrolled the AFC earning a 12-4 record and the number two seed in the conference. However, their biggest challenge came in the AFC Divisional against the Houston Texans. In the first quarter and five minutes of the second quarter, the Texans were the more dominant team as they led 24-0.

From that point forward, the Chiefs went on the type of scoring run that was video game like. They had six consecutive touchdown drives on offense between the second quarter and third exploding for 41 unanswered points. Four touchdown passes from Patrick Mahomes and two rushing touchdowns from running back Damien Williams put the Chiefs in total control.

The Chiefs would win this shootout, 51-31. Mahomes was masterful throwing for 321 yards and five touchdowns. Travis Kelce was the go to guy catching ten passes for 134 yards and three touchdowns. They would win the AFC a week later against the Tennessee Titans.

Three weeks after the epic win against the Texans, the Chiefs found themselves in the Super Bowl for the first time in 50 years. Prior to appearing Super Bowl 54 against the San Francisco 49ers, the Chiefs last Super Bowl appearance was in the 1969-70 season against the Minnesota Vikings, which they won. (Make a mental note of this, it might come up later). In Super Bowl 54, the Chiefs once again had to rally. After taking a 10-3 lead early in the second quarter, they would give up 17 straight points and trailed 20-10 after the third quarter.

In the sport’s biggest game, Patrick Mahomes showed everyone why he was the league’s MVP. A ten play, 83 yard drive capped off with a one yard touchdown to Travis Kelce cut the deficit to 3. With 2:44 left in the fourth, the Chiefs would retake the lead 24-20 after another touchdown pass to Damien Williams. Williams would provide the knockout punch with under a minute left with a 38 yard touchdown run putting them up 31-20. It would be the franchise’s first Super Bowl victory in 50 years. Speaking of the Chiefs first Super Bowl victory…

The next playoff game I chose to rank is perhaps the most meaningful for the franchise. At the time, the NFL had not become a full league yet. It was still split up between the American Football League and the National Football League and the Super Bowl was still fairly new. Super Bowl IV (4) took place between the NFL’s Minnesota Vikings and the AFL representative Kansas City Chiefs.

This team was legendary in every sense of the word. They were coached by Hank Stram and their quarterback was Len Dawson. After an 11-3 regular season, the Chiefs beat the New York Jets in the divisional round and then beat the Oakland Raiders in the AFL Championship game.

Super Bowl IV was the Chiefs’ crowing achievement as they upset the heavily favored Vikings 23-7. Shortly thereafter, the AFL and NFL merged and the game of football would change forever.

In the 1993 season, the Chiefs were somewhat of a surprise team in the AFC. They won the AFC West with an 11-5 record with Joe Montana at quarterback. He was famously traded from the San Francisco 49ers to Kansas City before the season began. In week three, the Chiefs suffered a 30-0 blowout loss against the eventual number two seeded Houston Oilers. They would meet later down the road in the postseason. After the Chiefs won in comeback fashion against the Pittsburgh Steelers in the Wild Card round, a rematch with the Oilers was on tap.

In this matchup, Houston was the hottest team in the AFC coming off an 11 game winning streak to end the regular season. They were ready (or so they thought) to steamroll the Chiefs. Before the game, Montana was suffering from extremely sore ribs that he had to receive two painkilling injections in addition to a swollen left hand. In the first half, the Oilers defense dominated leading 10-0. It seemed as if the fairytale ending was not meant to be. 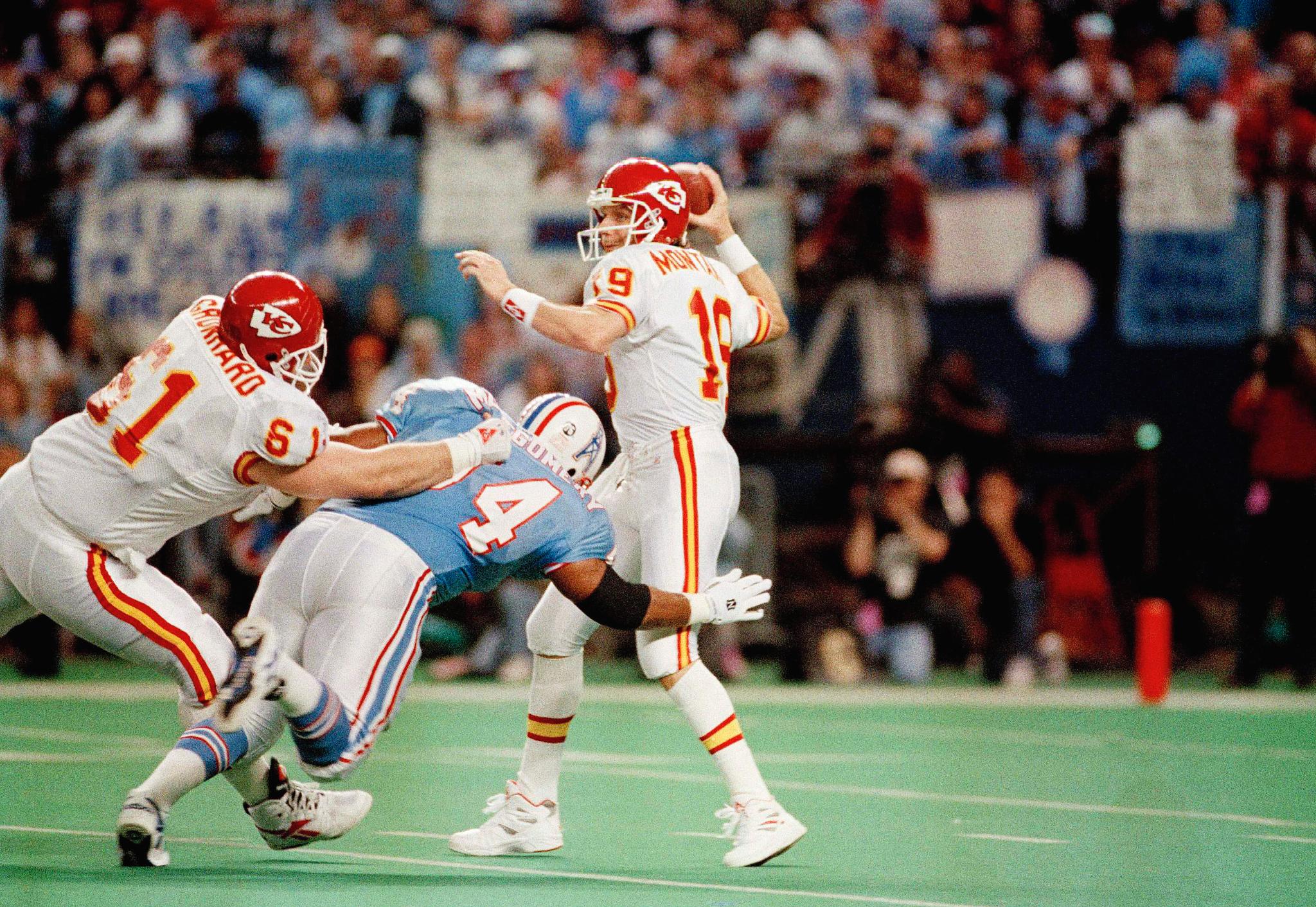 In the second half, Joe Montana turned back the clock one more time. After a touchdown pass to tight end Keith Cash cut the Oilers lead from 10-7 in the third, the fourth quarter was perhaps the finest hour in Montana’s hall of fame career. Two touchdown passes, one to receiver JJ Birden (with six defenders putting pressure on Montana) gave the Chiefs a 14-13 lead. The second touchdown was a RIDICULOUS pass to Willie Davis to put the Chiefs up 21-13 with 7:44 remaining. The Oilers would score one more time to cut the Chiefs lead to one, but then a 38 yard touchdown run by Marcus Allen would seal the deal and Kansas City would pull off the improbable upset 28-20 to advance to the AFC Championship game.

Afterwards, Montana was quoted saying “It feels good to be in one piece, still playing, still winning”. Absolutely, Joe.

No other words to describe this game except one: PERFECTION. In the 2015 Wild Card game against the Houston Texans, the Chiefs came to play from the beginning. A 106 yard kickoff return touchdown by Knile Davis set the tone. The defense did their part as well, forcing four interceptions off of Houston quarterback Brian Hoyer during the game. Chiefs quarterback Alex Smith really did not have to do much completing 17 passes for only 190 yards and one touchdown and one interception. Travis Kelce had eight receptions for 128 yards. Simply put, it was one of the best team performances anyone will ever see in a playoff game.

These are six memorable playoff games that will live on in Chiefs history until the end of time. What memories will be created in the 2023 playoffs?