The Chiefs have experienced different issues throughout the season. A share of the problems have come from the special teams unit. While these issues shouldn’t define the unit, the errors have seemingly gotten worse this year.

In 10 seasons under Special teams coordinator Dave Toub, the Chiefs special teams units have led the league is several categories including kickoff return average, punt return average including touchdowns. Since 2017 under Toub, Harrison Butker has the 3rd highest FG percentage in NFL History (88.6).

Unfortunately, Toub hasn’t been quite the special teams expert the team knows him to be and his units have actually gotten worse in 2022. Rather muffed punts, missed field goals, bad holds, fake punts, and unprepared on-side kicks, these issues could haunt the Chiefs next week in the divisional round rather its the Chargers or Dolphins.

The Chiefs know it’s an issue and are desperately working to solve it. Let us be of some help and suggest three solutions before a mishap costs the Chiefs in a big way. This is Part 3 focusing mainly on the punt return unit. I looked at Inside the Pylon at old footage from various units including ours and it will lead me to write out what are the main ways our punt return unit could dominate the playoffs. 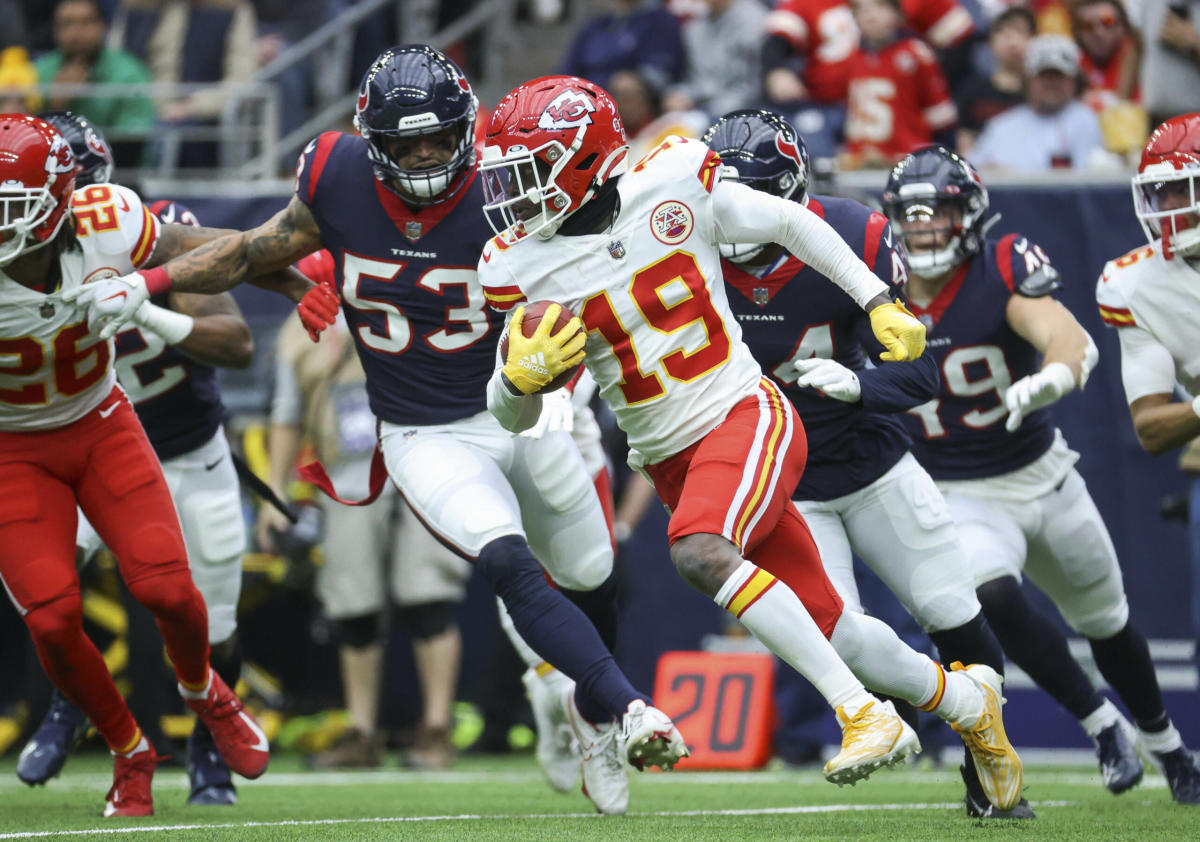 Bucky Brooks explains why the return specialist position is one of the most important positions in football. This quote is from 2015. “The recent rule change on kickoffs has led to more touchbacks and dramatically reduced the role of the kick returner, but special teams coaches still covet a playmaker at the position. Returners capable of pushing the ball out past the 30-yard line not only increase the odds of scoring on offense, but they set the table for winning the field-position battle. Punt returners have more opportunities to impact the game in today’s NFL; special teams mavens look for guys with the potential to average 10-plus yards on each touch.

Sometimes it takes a while for a unit to play on the page. For the Chiefs’ special teams unit, it looks like it took until Week 14 in the team’s 34-28 win over the Denver Broncos to hit that point. Both the Chiefs’ offense and defense showed clear issues that need to be addressed, but the special teams unit had a great, consistent day overall.

All it took was a change in and trust in that new personnel for the punt return squad to go from a weakness to something that won’t hurt the team. It looks like the experiment with receiver Skyy Moore at punt returner has ended which shouldn’t have been an option in the first place, and the Chiefs had trusted wide receiver Justin Watson (#84) for Weeks 12, 13, and 14 while Kadarius Toney (#19) and or Mecole Hardman (#17) gets their chances with that spot moving forward.

After watching the film on the Chiefs Wire article after Week 14, based on Watson’s series of returns, here’s what we know about Watson as a returner:

This leads me to say that when the Chiefs punt return unit sets out there with Toney, you know you he has the ability to break for the big one but it all comes down to the blocking from the guys up front. In one of the Week 14 returns, I noticed both of the Chiefs’ jammers, Trent McDuffie (#21 left side) and Chris Lammons (#29 right side) were beaten by Denver’s gunners. Watson probably should have called a fair catch, but instead fielded the punt for a one-yard gain.

Watson would have actually had plenty of breathing room on this return if McDuffie was not beaten by the gunner. His play at cornerback on defense has been phenomenal, but he has bring that same aggression as a jammer. On defense, McDuffie tends to jam early and then allow a release while staying tightly behind the receiver. Then he’ll close in and make a play on the ball. But the problem with doing this as a jammer is that the gunner isn’t trying to catch the ball, they’re trying to catch the returner.

I think what will benefit McDuffie borrowing some techniques from Lammons who often plays the position more aggressively (and much more successfully) and Chiefs special teams captain, running back Jerick McKinnon who has been the Chiefs’ best blocker on kick returns in 2022. Lammons tends to use his hands more and tries to throw the gunner off balance, using the gunner’s leverage against him and steering him away from the returner long enough to give the returner a few more seconds of breathing room.

That’s what he did for Mecole Hardman when he returned the ball 67 yards against the Miami Dolphins in 2020. A lack of aggression and hand-fighting can allow the gunner to garner just enough straight-line speed to cause the punt returner to think twice about returning. That front 7 or 8 in the box area must know their role just like the kick return unit.

For every great return, there are many great blocks. 11 players working together in organized chaos and punt return blockers are only recognized when they get penalized for blocking in the back. That should never keep the blockers from making an effort to help the team in a winning effort every special team snap. Guys like former Chiefs linebackers Josh Martin and DJ Alexander were well respected for being great blockers on the Chiefs special teams.

Martin was well known for helping De’Anthony Thomas return a 81 yard punt to the end zone in 2014. DJ Alexander (LDE role) helped Tyreek Hill explode on the scene with his 78 yard punt return TD against the Raiders. The guy the can play that role Martin played DL4 role (5 technique DRE) is linebacker Darius Harris.

Harris along with Lammons was key guys that blocked for Hardman on his punt return score in 2020. With the Chiefs only showing six men near the line of scrimmage, it is clear they are prioritizing a strong return over blocking the punt. Harris should always bring some aggression on his block on the LT and LG role on the opposing punt coverage team where Harris like Martin did on the DAT return in 2014 does not attempt to bring pressure on the punter as said from Inside the Pylon, but instead secures his opponent to prevent him from getting downfield toward the returner. Not just Harris, the four or five other Chiefs have to use the same technique.

Shortly after the ball is punted, Harris and his LT/LG should still at the same yard line from where the punt took place. That LT/LG could begin to loop around him, then Harris takes a path straight up the left or right hash to mirror his man. On a number of the opposing punt coverage defenders should have a free release at this point as they work downfield. Depending on if you watch All-22 film, you should sky the view of a punt return and watch the side of the coverage defenders like on Tyreek’s legendary TD, majority of the Raiders had a free release to the right.

That gave Tyreek enough time to use his vision to find the openings from his blockers on the opening left side to score. Thats the path our team must open up for Kadarius Toney or Mecole Hardman. I believe Toney will be the guy because his juking ability and breaking tackling skill set reminds me a lot of Percy Harvin.

Also I noticed Joshua Williams (#23) lined up like a LDE/LOLB role on punt return, he has know his role as well. I noticed he was too early on his blocking assignment in Week 14 on one of the Watson returns. Next time, I’d like to see the Chiefs with seven men near the line of scrimmage. Four of them are stacked on the left side, with Bryan Cook (#6) preparing to stunt to the outside of Noah Gray (#83) or Harris (#47). Only two Chiefs should be in position to rush the punter, and the reason for this will become evident to why I am bringing up Darius Harris. Deon Bush (#26) should drop back from the line of scrimmage before the hike.

Immediately after the ball is snapped, the Chiefs should have six to rush the punter. Toney can track the airborne ball and can head back towards any side of the turf to field the punt. Bush, which ever side of the field between the numbers and hash marks, should look to work back towards the right to seal a potential block. Jack Cochrane (#43) and Harris, rather they’re between the hashes near the end zone or behind the punter, they should begin to work back toward the left or right side.

An example of that free release, three opposing defenders will race down the either side of the field. The three coverage defenders on could continue to close in on Toney. However, Cochrane and Harris have to work across the field; they should continue to track back and prepare to scour potential blocks for their punt returner.

While they may still have a chance of catching Toney further downfield, his ability to make people miss will put them at a significant disadvantage. A number of Chiefs guys should already be engaging their blocks coming from either side, covering the opposing punt coverage unit along the path where the return is set up. Cochran and Harris, lets say if we play the Bengals again and its received at the Bengals 30-yard line, those two should work themselves into position for blocks that could turn an average punt return into a personal escort service for Toney as he heads down the sideline.

This is what is known as a “wall punt return”, a variation of which was used by famously by John Fassel as the then-St. Louis Rams Special teams coach when he had Tavon Austin. An ideal situation for a wall return according to Inside the Pylon is a kick to the opposite side of the desired return, as it gives the return team the largest expanse of field to work with.

This can be incredibly effective but is also a higher-risk play, as a directional kick towards the desired return side can limit the space available to set up this type of return, leaving the returner vulnerable to an onrushing mass of humanity intent on a forceful collision.

But a potential Toney return is also a good situation to call for a wall punt return since punts from the end zone usually aren’t directional punts; the punting team normally wants as deep a punt as possible.

Josh Martin is the guy that helped DAT become a 2014 All-rookie team return specialist, he finished his sprint down the field at the same time as Thomas flipped into the end zone. After running 125 yards, Martin still has energy to keep moving. That is the kind of effort that special teams coaches demand out of their players, and marks one of the finest individual performances on special teams this season. We need that same effort from our guys coming into the divisional round next week.

I believe Darius Harris is 2022 Josh Martin. Both undrafted and play linebacker and special teams for Andy Reid and Dave Toub. The next punt return play should be properly executed by the players and well drawn-up by Toub, with the Chiefs’ blocking resources allocate to where the returner is actually going to be. And the Chiefs have two competent returners that can make strong decisions throughout their runs to advance the ball upfield.

Creativity doesn’t have to be complicated in order to be effective. Our chance to play in Super Bowl 57 could be from the simplicity and elegance of a punt return just like this play provides exactly what is needed to make a game-changing sequence for the Chiefs’ special teams.