Has Mahomes’ $500 Million Contract Formed Kansas City Into A Dynasty?

How Mahomes’ Massive Contract Extension Has Assisted The Chiefs.

While there is no “I” in team, the quarterback position is always going to have the spotlight at every level of football. There’s no disputing the importance of the position in 2022. The quarterback is not only the team’s biggest decision maker, but his ability to make timely plays and efficiently manage the game routinely determines which team lands in the winner’s circle at the end of the season.

The importance of the quarterback position is exactly why the Chiefs locked up Patrick Mahomes for a very long time.

Mahomes signed the richest deal in NFL history when he inked his 10-year, $500 million-plus contract with the Chiefs, which took effect in 2022. When you look at his total contractual value, it remains the greatest in the league today. Brett Veach and the Chiefs front office redefined the QB market with their massive offer to Mahomes.

The Browns’ and Broncos’ $250M deals with Deshaun Watson and Russell Wilson is just the most recent domino to fall in the pattern of high-dollar contracts that followed. Unfortunately for Denver, their deal with Wilson, has became a failure already. While Wilson’s deal is worth roughly $4 million more per year than Mahomes’, what makes the Mahomes contract look like a steal in comparison is his recent success.

The Chiefs were in a position of luxury in the sense that they were able to set the bar for a total value of a generationally talented quarterback in today’s game, and since they’ve offered Patrick Mahomes his deal, they have enjoyed persistent winning.

After Mahomes, Good QBs on a rookie contract, like Joe Burrow, Lamar Jackson, Jalen Hurts and Justin Herbert, are extremely valuable to their franchise as they play on cost-controlled fixed deals for their first four to five seasons in the NFL. This allows franchises a nice window of opportunity to surround the young QB with a talented arsenal of weapons on offense and a strong defense on the opposite side of the ball before the QB commands a potential record shattering extension.

Because of this, I will explain why Mahomes contract is great for the Chiefs in the future in terms of building the team around MVPat and company to have a long Super Bowl window?!

How did the Chiefs pull off a successful rookie deal?

When a team chooses their future signal caller in future drafts, they must at least infuse talent and competition in the QB Room early with risk averse options. Because in year one of a rookie QBs contract it’s beneficial to have a veteran presence to not only guide the rookie QB in the right direction, but also play should the rookie QB need more seasoning.

It’s seemingly become common practice for teams to double up on the QB position through free agency and the NFL Draft at the start of a new regime to infuse talent and create competition in training camp. That’s why Mahomes did so well in his first start because he took the time to learn the system and work on his mechanics before taking the field.

The difference between Mahomes and other QBs for example, Russell Wilson. The real reason Mr. Unlimited had success from his start his rookie season in 2012 to 2016 was because he had Marshawn Lynch, a dominate defense featuring Richard Sherman, Kim Chancellor, Earl Thomas, Bobby Wagner and Michael Bennett. Wilson thrown into the fire had a very good supporting cast but they later exposed with the Broncos that he should’ve taken the same route as Mahomes.

The Chiefs did their part by investing in their future QB, sat him for a year, learning the scheme, and showed the poise and confidence in 2018 as if he was a 10-year veteran. The planning, timing and team work among the staff and players have contributed to Mahomes’ rookie deal being a success for the team and now his $500M deal is just as for the Chiefs as it is for Mahomes.

When Mahomes restructured his deal in 2021, it looks like he took a pay cut but its not. He’s still receiving his bonuses and receiving the same pay. The Chiefs can save significant amounts of cap space just by restructuring the roster bonus and turning it into a signing bonus every season. Plus, the money as I’ve heard is coming directly from Clark Hunt’s pockets. This allows Brett Veach and his executives in the future to sign, trade for, or draft a strong offensive line, pass rush unit and shutdown defensive backs.

Imagine if Mahomes was thrown into the fire without time to throw, he’d never have the time to develop into the player we see today. Mahomes sitting behind Alex Smith, learning the offense during the 2017 campaign going through his reads and adapting to the speed of the NFL.

Mahomes would take over the starting role the following season when Smith was traded to Washington. The team already invested in a strong offensive line unit led by Mitchell Schwartz, Eric Fisher and Mitch Morse, afford the young QB time to process coverages quickly and possessed the mobility to avoid the rush in his MVP season.

Morse left in 2018 for the Buffalo Bills, The Chiefs still had Schwartz, Fisher, Cam Erving, Andrew Wylie, and Austin Reiter do their part leading the team all the way to winning our first Super Bowl in 50 seasons. The following season, Schwartz and Fisher got hurt leading up to the Super Bowl. Mahomes looked like a deer in the head lights under the center with a patchwork offensive line in Super Bowl 55. When the two key tackles missed due to injury and bad play from the interior, Veach took notice and freed up cap space by releasing Schwartz and Fisher.

First he almost signed All-Pro left tackle Trent Williams before he returned to the 49ers, then traded for Ravens Pro Bowl left tackle, Orlando Brown Jr., to insure Mahomes has a reliable left tackle and also upgraded the LG, C and RG positions via the draft and free agency period, signing former Patriots All-Pro Joe Thunk, selecting Creed Humphrey in the 2nd round and stealing Trey Smith in the 6th round of the 2021 Draft.

Effectively running the ball takes a ton of pressure off a young QB. Having a strong run game can force defenses to put more defenders in the box, allowing more throwing lanes to open on pass plays. It also allows teams to not force the developing QB to do too much early on in his career. Meaning that late in a game the QB can hand off the ball and control the clock to finish off games instead of having to convert 1st downs through the air.

A lot of Mahomes’ success has to do with Andy Reid’s QB friendly scheme, but it also helped to have great talent in the pass and run game to take pressure off Mahomes. That’s why Mahomes told Jamaal Charles, he wishes he played with him. Mahomes was fortunate to have Kareem Hunt early, Damian Williams, Shady McCoy and Darrel Williams toting the rock but with Isiah Pacheco in 2022, The 7th rounder carrying the load so Mahomes doesn’t have to carry the offense by himself.

The Chiefs use the same mindset as if Mahomes was a rookie every season who needs to benefit from a very good offensive line unit in combination with a strong backfield now that Tyreek Hill is no longer here. Mahomes can use any pass catching as long as he can catch it.

Another way to ensure success, aside adding offensive help to aid any inexperienced QB early, is to build a capable defense on the opposite side of the ball. Look at what the Seahawks did from 2012-2016. 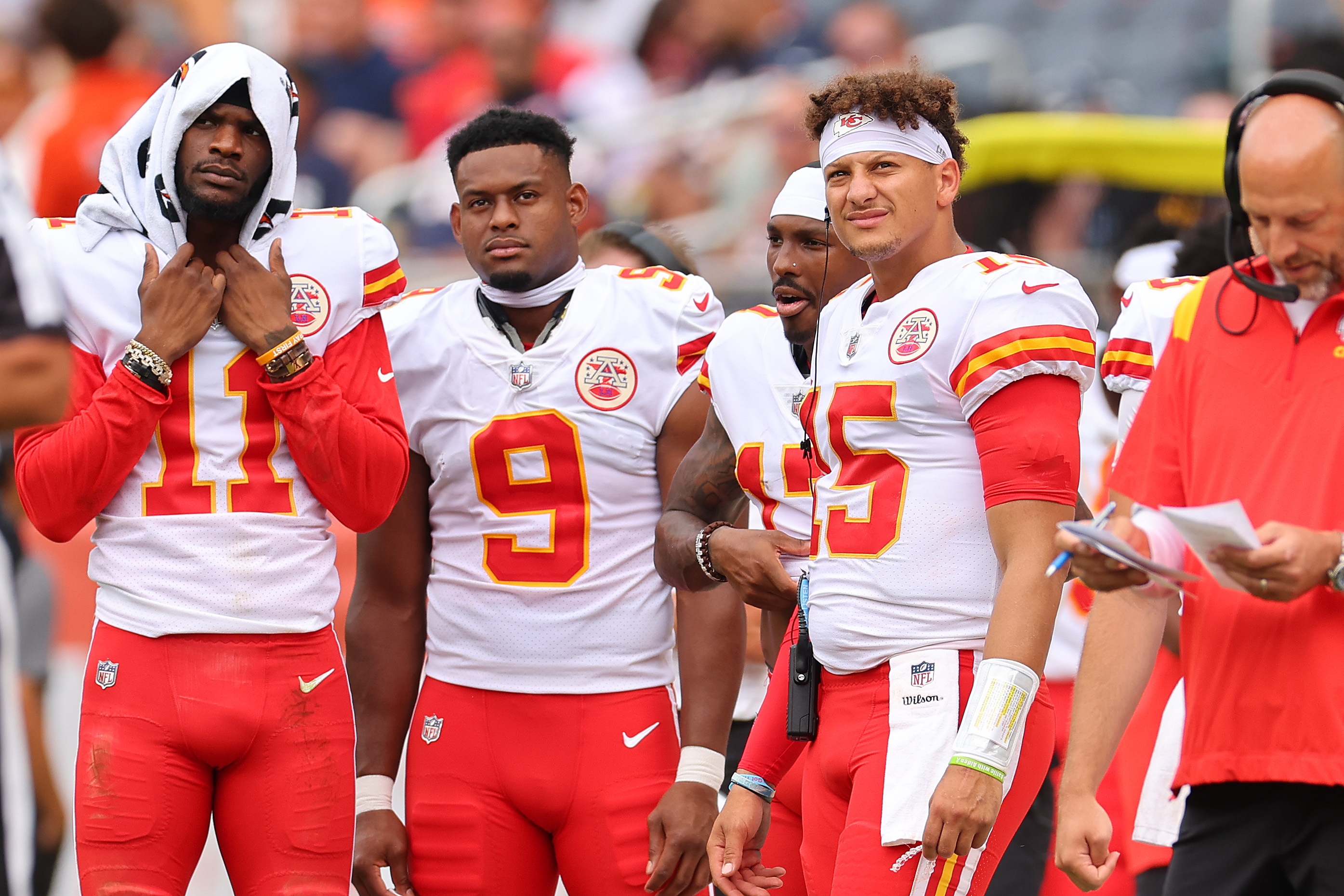 Meanwhile, Veach added CB Trent McDuffie, S Justin Reid, WR Marquez Valdes Scantling, and JuJu Smith-Schuster. In 2022, L’Jarius Sneed and McDuffie have formed a very good cornerback duo and having Karlaftis and Dunlap team up with Jones and Clark is a nightmare for opposing offenses of any style.

These moves since 2021 when we drafted LB Nick Bolton makes me believe that we will continue to build our roster through the draft with studs and low cost/high reward veterans that help this roster stay in the Super Bowl for years to come. The Chiefs have set the standard when it comes to taking care of their own and building that trust to ensure future success.

It’s not about the deal but with Mahomes, Veach, Reid and Hunt all in alliance together to build on our success, I am happy that we have a team that has that window and we have the Michael Jordan of the NFL and his name is Patrick Lavon Mahomes.